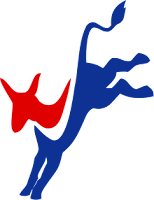 Well, that was exciting and quick. Done in 45 minutes! And more participants than I've ever seen at a Democratic Caucus in Utah! (Well, I've only been here for four now). In fact, there were more in attendance at Centerville Elementary for our District (West Bountiful to Kaysville) than were at the County Convention two years ago.

My son and his fiancé went with me. My son is registered here in our precinct. His fiancé lives in Salt Lake City so she missed her caucus (sorry, Senator McAdams).

My eldest daughter was texting me that she had sent her husband and stayed home with the boys. We struggled to save a seat as the place filled up. I was pleased that he showed, and in spite of his preference for country music, he participated tonight as a Democrat.

We helped set up more chairs until they pretty much ran out. We saw the parents of my other daughter's missionary "friend" who is in Italy. The dad is the former bishop in a neighboring ward. I heard someone else give a shout-out welcome another bishop - so we had a couple at least. I didn't see anybody from our High Council or Stake Presidency, though. I also ran into my wife's Scouting friend from Farmington.

The young woman calling the caucus to order was a little befuddled by the crowd. She proposed that we go around the room and introduce ourselves and explain why we were there as had been the custom in the past, but she was quickly talked out of it by some more mature ladies who said it would take all night!

We saw a short video from Pete Ashdown running for Senate against Hatch unless Hatch gets boobied by the tea party day after tomorrow. Then we turned in our presidential preference ballots marked for the President rather than "uncommitted" - well, at least mine was marked that way. They talked about a few candidates and tried to recruit for a couple of candidate slots still to fill.

They explained the rules and we broke into precincts. There were ten (!) of us! My buddy from the State AG's office nominated the big guy from up the hill to be our chair which I had already willingly given up. Then we put about six of us on the list for the County Convention, me included. The character who lives across from my AG friend really, really wanted to go to the State Convention, so we let him. A new participant, a woman in our ward from around the corner, also signed up for the County Convention. Her husband is a Republican (with a personality rather high on the annoying scale).

My wife didn't go. She's going to have to deal with Mr. "Annoying" and a lot of other tea partiers for three or four hours this Thursday.

Meanwhile, in the Southern Primary - Rick Santorum. Really?
at 9:36 PM