Their Eyes Will Open and They Shall See!

Originally published on the other blog on March 20, 2012 as,
"Their Eyes Will Open and They Shall See!" 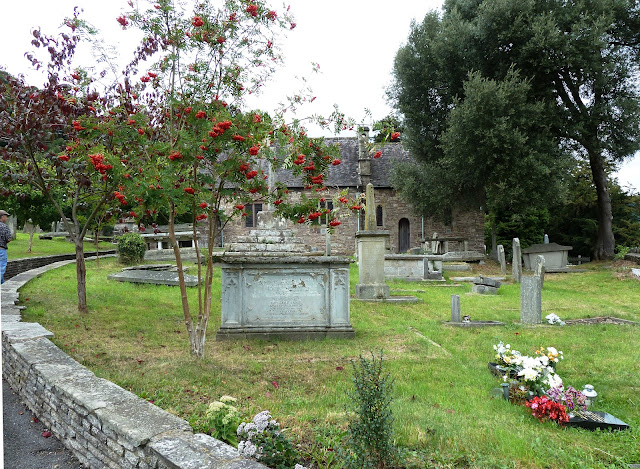 A beautiful green churchyard at Saint Faith's, Llanfoist, Monmouthshire. The direct paternal link to my surname lies just a few paces ahead of me and to the left. He rests among the dead. I want to be there on the morning of the resurrection to wake him when his bones put on regenerated and glorious flesh and pure spirit courses through his veins. 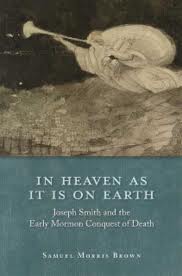 I'm just back from the Bountiful Temple where I participated in sealings for family names I took there. I also just finished a wonderful book, In Heaven As It Is on Earth: Joseph Smith and the Early Mormon Conquest of Death, by Samuel Morris Brown (Oxford University Press 2012).

This is a serious study of the historical development of Joseph Smith's religious foundation for Mormonism on the theme that it all connects to a practical need to conquer death. It seemed right from the start as I have had similar thoughts probably influenced by my reading nearly 30 years ago of Richard L. Bushman's Joseph Smith and the Beginnings of Mormonism (University of Illinois Press 1984). This book became the nucleus for Bushman's fuller biography of the Prophet Joseph, Rough Stone Rolling. My edition of the earlier book is heavily marked up (particularly to cross out the occasional footnotes and texts of Hoffmann forgeries).

The theme I got out of Bushman years ago came back with Brown. Joseph was very much concerned about the death of his oldest brother, Alvin, just after Joseph had his first visit from the Angel Moroni. When I visited Palmyra the summer of 1989, I made a point to climb up the little rise to the cemetery to pay my respects at Alvin's grave.

Brown's amazing theme of conquering death carries Joseph through all the developments of early Mormon belief, most of which we still hold to even if we don't practice (well, polygamy in particular). There are the the concepts of modern prophets and scripture from ancient texts, baptism for the dead, temple ordinances for eternal families, the pre-mortal existence of man, a literal Father and even Mother in heaven, and the physical resurrection to become like our Heavenly Parents. All this is presented in the historical context of the day within the difficult balance between serious historical criticism and the avoidance of apologist justification.

Last night in family scripture study, I was talking about this with my wife and two boys still at home. We just happened to read 3 Nephi 24 and 25 in which the Resurrected Lord visiting the Nephites provided them with the prophecies of Malachi to add to their scriptures. I was stunned that for all the development of Joseph's unique theology through his short life culminating with the Temple in Nauvoo finally with a baptismal font "conforming to that which is heavenly," that here in the 1829 translation of the Book of Mormon was that promise about the hearts of the fathers turning to the children and the children to the fathers. And then I remembered it goes back even further as the Angel Moroni presented a variation of the same scripture to the boy Joseph in 1823:

Brown has an interesting perspective of death and life as a young, ICU doctor using modern science to respect and promote life with the greatest reverence for the passage of life into another stage and all the cultural trappings our ancestors experienced, some of which we could do better with today. And his grasp of historical Mormonism is phenomenal.

There's much more I could say about this book as I blog on into the future. Let me close with this thought. Brown, as a faithful, modern Mormon (like me), is relieved that we are no longer bound by the practice of polygamy even as he explains that it was about much more than the physical aspects of procreating extended familial connections. He posits that modern Mormonism has to find other ways to link us into larger communities of believing families. I actually think that is happening. We share spiritual experiences in church service at welfare and temple assignments. We mourn with those who mourn in times of tragedy and repentance with ecclesiastical responsibility or out of simple Christian fellowship. And we are still linked by extended family connections through sacred sealing power.

My closest friend at present, beyond my spouse, is my wife's sister's husband. He is no blood relation but still connected to me through two temple sealings and common in-laws (who, by the way, are pretty good people - and that is a great blessing in life). And then tonight at the ward sealing assignment, I was sitting in the room as the names on the pink cards were read in the sacred ceremony linking them to their parents for all eternity. The proxy for the female names I had provided from my family history work was a dear, elderly widow in the ward whose husband, through a previous spouse that had died, is the grandfather of the young woman my son will marry in the Salt Lake Temple in a few weeks. We don't need modern polygamy to link expansive families together. We all seem to be linked up somehow. And it will only get better the more we do our family history and temple work that will inevitably connect us all together.

The promises are planted and the hearts are turning. And I'm looking forward to that resurrection day. We have a lot of work to do.
at 10:22 PM