The Divine Right of Shark Jumping 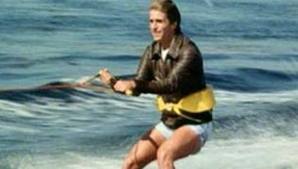 "You work and I'll get the tax cut"

Yep. I think the Republicans have finally jumped the shark. Governor Romney will be joining Paul Ryan and the Fonz on the water skis tonight.

In the Lincoln-Douglas Debates, Lincoln skewered the underlying philosophy of slavery protected by Stephen Douglas's "Popular Sovereignty" (as long as you were a white, male voter) when he compared slavery to the Divine Right of Kings with his cutting summary "You work and I'll eat the bread." Now, the party formerly of Lincoln, now of the former Southern Segregationists (or their kids), has jumped the shark with their tax cut plans and anti-We-the-People economics. Of course they've actually been doing this since Reagan, but I think we're finally catching on.


Sure, we have to fix the deficit. But I like President Obama's plans, or at least some sort of compromise, both continually blocked by Paul Ryan's Republican House. If we've learned anything about he past 30 years, it should be that the "trickle-down" theory (or "Voo-Doo" economics, thank you GHW Bush) doesn't work. We crashed in 2008, before the election, not after Obamacare. And, in spite of the rhetoric, we have been in a slow and steady economic recovery under President Obama.

Can we do better? Sure, and we must. But not on cutting taxes for the wealthy and destroying progressive advancements in society promoted since Lincoln and Teddy Roosevelt (and based on the Founders). Abe and Teddy would not recognize their party today. They'd probably break away and form some National Union, Progressive, or "Bull.Moose" Party.
at 7:36 AM