The Founders Didn't Build That 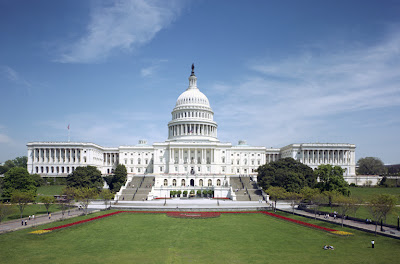 The U.S. Capitol. Symbol of Democracy, Constitutional Government, and Freedom around the world. Built by Slave labor.

Yep. I ran across an interesting article published by the Architect of the Capitol. It analyzes the "contribution" of African-American Slaves in the construction of the U.S. Capitol and many other historic buildings in our nation's capital. The United States didn't actually own the Slaves, we only rented them from their owners. I'm so relieved.


Slavery is a stain on the Constitution. Fortunately, actually I believe blessedly, the Founders did set the principles in place for the eventual removal of the shame of slavery. Unfortunately, it only came about through a bloody Civil War and the martyrdom of President Lincoln. It was Lincoln who fused the principle of the Declaration that "All men are created equal." with the consistent principles of the Constitution set out most succinctly here:


We the People of the United States, in Order to form a more perfect Union, establish Justice, insure domestic Tranquility, provide for the common defence, promote the general Welfare, and secure the Blessings of Liberty to ourselves and our Posterity, do ordain and establish this Constitution for the United States of America.

It is more than ironic that our U.S. Capitol was built on the backs of Slave labor.

Now, I'm not calling for wallowing in the past mistakes of earlier generations, or reparations, or even white guilt. We the People have made significant progress. Yet we have not completed the "more perfect Union." It is an ongoing process. And let me just say that unnecessary voter ID laws reminiscent of the old and now unconstitutional poll taxes don't help. All I want is for us to get rid of the idolatrous mythology of the imperfect, even if inspired Founders, and accept the reality of our history and our current work to promote government of, by, and for the People - all the People.

Back to the Slave labor. The report of the Architect of the Capitol notes that there is not a lot of documentary evidence of the Slaves who built the monuments to Democracy. In those days, there was not a lot of attention to record information about common laborers and especially Slaves. Most of the information we have is based on the records of rental payments to the owners of the Slaves.

There are a couple of biographical stories that survive. One is of Philip Reid, a Slave, who, working for and with his master, helped solve the problem of preparing the casting of the statue of Freedom that sits atop the Capitol Building. A Slave helped with Freedom. And then, by the time the Statue was placed on top of the Capitol, Philip Reid was a free man. It was 1863.

There is powerful irony there. And as I see it, an ongoing charge to us, We the People, to continue to do better.