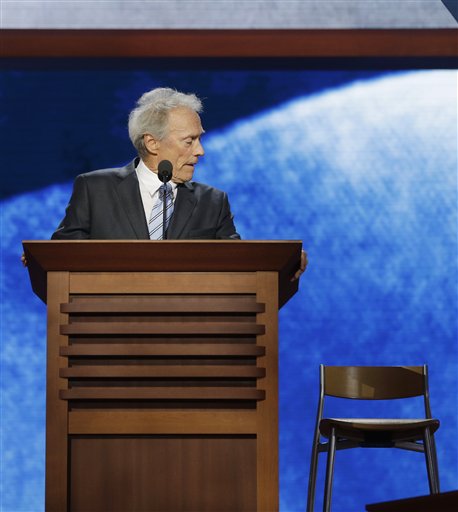 Romney did just fine with his speech. His supporters should be pleased. He didn't win me over and we'll continue to talk about that. But it is really unfortunate that this convention will go down in history not for Romney's speech, not even for Paul Ryan's. It will not be the hurricane or the code pink disruption. This convention will go down in history because of the old man mumbling incoherently to a chair. They are joking about talking to the empty chair on "Morning Joe" this morning as I type.

It's OK in the sense that the chair may replace Seamus the dog as the easiest dig at Romney and the Republicans from the opposition. At least they're true as opposed to the false charges [i.e., lies] against the President including the pants-on-fire one about the so-called "apology" tour. Romney wrote a book playing off that fiction and he included the lie in his speech last night.

The other Mormons did well last night. Romney made some progress in humanizing himself, but I think he really helped humanize Mormonism with those people he had speak. They are getting respect from all over the press and political spectrum. Romney's sincere love for family and his parents, including his pro-choice, political mother, was also very helpful. And I just had this thought that with these positives on the record, it may be good to have Romney lose as any political bad taste he personally leaves in anyone's mouth won't reflect negatively on the church for a whole presidential term.

But Romney's got a lot of supporters around the country. Clint even says there are a lot some of them in Hollywood. They just don't draw a lot of attention to themselves as they stay at home mumbling to their furniture.

ADDENDUM
September 1, 2012
I don't recommend, or even watch, the Daily Show with Jon Stewart much. Mainly it's a problem with all the bleeped language. But as Clint Eastwood was just as bad, or worse - in prime time, as the "surprise" special speaker, before millions of people, and leading up to Mitt Romney accepting the nomination, I think the Republican Party has some explaining to do - except, Jon Stewart just took care of that.

Jon Stewart hit the nail on the head. You've heard all those terrible (and untrue) things from the critics of President Obama for the past four years? Well, it's because they are about an imaginary, invisible President Obama only they can see (and some talk to!) - not the real one the rest of us know.

I do recommend. Click on the picture and it will take you to a link of the show last night. 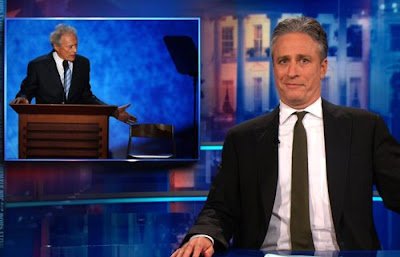 It is possible that Clint was engaging in some bizarre performance art to point out the insanity. I just don't think he's an Andy Kaufman or Joaquin Phoenix. If he is, BRAVO!
at 7:12 AM