That's how some are describing the 2012 Presidential contest now that Paul Ryan shores up the campaign linkage to his proposed budget. It is a bit of an exaggeration on both sides, but that's how they describe each other, so we can freely use it in our considerations.

Paul Ryan is a compelling figure with charisma and a good rapport with Romney. The former Governor of Massachusetts does deny that he will use the Ryan budget because he has his own budget plan with even less detail as to what he will actually cut. Of course it requires a bit of a flip to choose the guy who's claim to fame is the proposed gutting of the federal government and then distance yourself from that fame. But maybe it's just a flop.

And, while Ryan has taken on the seriousness of attacking the federal budget, he also presents the President with exactly the contest he wanted - the President was already running against the most unpopular Congress ever. We've been stalemated since the tea partiers came to power and the President has presented budget plans that include revenue enhancement (yes, taxes), at least from those most able to afford it. The House refuses to compromise on anything, as is their right. Now, the President and his party can continue to run against the Republican Congress's Ryan budget in an attempt to get something closer to an equal playing field for all, not just for those who already have opportunity by birth, luck, or the favor of God (that whole "Divine right of Kings" business) whether or not they worked so much harder than everyone else.

At least the charges of Socialism can be countered with those of Social Darwinism (survival of the economic fittest in a less-regulated free market), instead of just arguing about where people were born and who is the most American, whose religion is worse, or just who is the most despicable. The most important thing is that the voters have a clearer choice of governmental philosophy and will decide this election and will keep on doing so. Of course, we do have that problem that corporate interests are also considered as people these days - one more "divine right" that seems to upend the equal playing field.

So, it comes down to this. Are we a community? or are we individuals? I think we're both - a community with the responsibility and commitment to preserve each other's individual rights as we promote the general welfare - the essence of our Constitution with the processes to do so - checks and balances and all. Let's find the means to work it out together. Oops. I just revealed my cards. Together. We the People. The Union. Forever.

So, as I try to regain the high ground on big, important principles, we have the President inappropriately joking about Romney's dog (at least it's a true story), Biden gaffing it up about chains, and Governor Romney pouting about how everybody is being so mean to him (I wonder what Gingrich, Perry, Santorum, etc. really think of that). 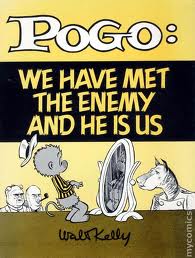