There is a strange reluctance with me to finish projects that I enjoy. But finish we shall even if the hiraeth is overwhelming.

The 27th day in Wales was a work day as my wife and I helped pack up and clean the BYU House. We wanted to earn our keep to stay a few extra days until the lease expired. My wife did break away to go back to the antique mall Professor Tom showed us in Cardiff to purchase the best example of what we think the teapot was like that my ancestor may have carried across the plains of America.

That afternoon, I picked up a car (automatic-transmission) for hire from Enterprise, which, yes, I do recommend because they pick you up (and let you use the loo in London suburbs!) That evening, my wife and I went on a drive so I could complete my collection of post boxes. That dang Edward VIII was not only a nazi, but cost us a blown tyre! We hit a curb not even my wife saw coming and we were flat by the time we got back to BYU House. I was devastated and failed to keep my frustration in check. We had an appointment for a tour of Hay Castle the next morning. I called Enterprise and told them of the predicament and that we needed it repaired as soon as possible.

Good as their word, a very large lorry that I did not believe could navigate the narrow streets showed up very early the next morning. 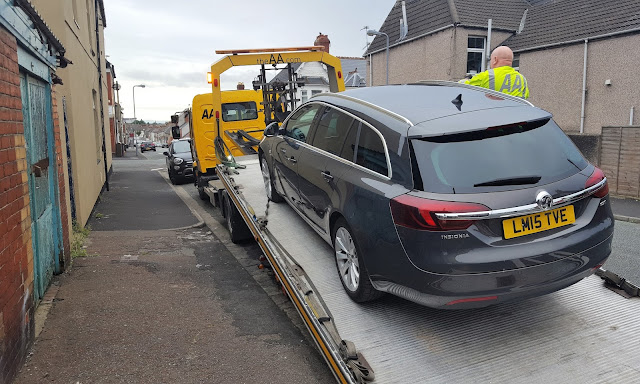 I rode with the lorry driver and waited while the wheel rim was repaired and the tyre replaced. I learned that the morning commute that morning to Cardiff Centre was problematic as two people came into the tyre shop for repairs showing the same screws that someone had let fly onto the A48.

We were all fixed up with just enough time to avoid curbs all the way to Hay-on-Wye. I sent my wife rushing up to the forming tour group as I went to the Hay car park.

The tour was fascinating even if we didn't see much more of the old medieval castle than you can from the outside. There is ongoing restoration work and I remain a Friend of the Hay Castle Trust to see that the project continues with me as a part of it. What we did see was upstairs and downstairs of the former residence and book store of  Richard Booth, self-proclaimed King of Hay.

I piped up when the guide explained that the cellar below the kitchen was the former Hay town gaol (jail). After the story of my ancestor, the crowd surprisingly "oohed" and "awed." And I politely questioned whether the cellar or the old keep was the gaol. The Hay Castle people will keep in touch on that historical question.

We also saw the attic. Now, all attics are interesting, but the attic of a castle? Sublime!

After the tour, we found it to be Market Day in Hay!

From Hay we headed back to Blaenavon as I wanted the visit the town museum in the Workmen's Hall.

The town museum was interesting with even some closely matching teapots and a recreation of author, Alexander Cordell's work desk. (Another strong recommendation of mine are his historical novels of the valley and mountain people).

We then stopped by Raglan Castle as my wife wanted to check the gift shop for a book she thought she had seen there. I waited outside and tried to catch the definitive view of the Welsh Flag over the ramparts of the Yellow Tower of Gwent. This is the best I could do.

It is good to see that Cadw is continuing its stone restoration work at Raglan.

Then it was along the hedgerows and narrow lanes to one of our more interestingly named ancestral places, LLantilio Crossenny.

We then stopped by Park Farm, where my 3rd Great Grandmother, Maranah Watkins, was a servant in 1841. They had never answered my letter, so we didn't try to go in. And we found ourselves at Hengwrt, a possible ancestral manor of Davey Gam, with only the moat remaining, and right up the road was White Castle, so, what the heck?

We were tiring, but I had to pay homage to Cousin Henry Vaughan's grave at LLansantfraed in old Breconshire, just up the road. 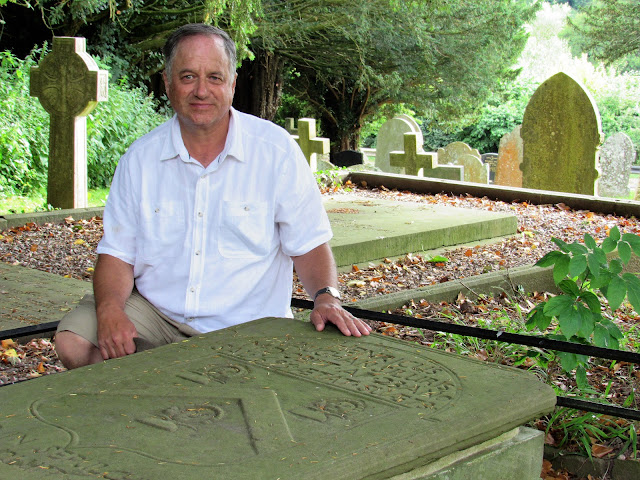 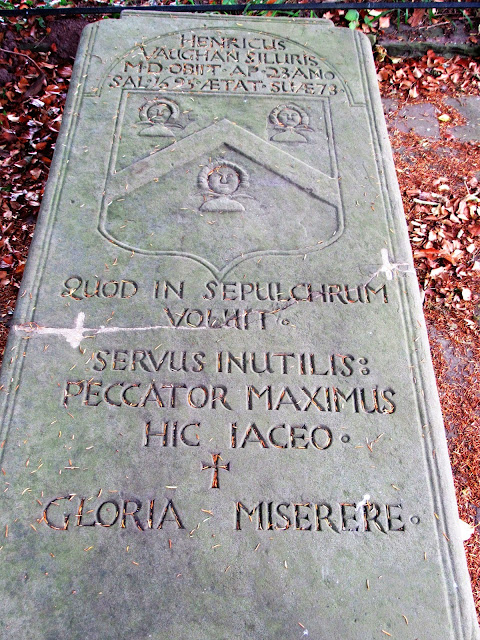 My name in the register with my comment and favorite quote from Henry Vaughan. That is the way I feel about all my deceased ancestors and relatives.