The beauty and joy never ended. Sure, Wales can be a little damp, but how else does it stay green? And two rainbows in two days had to be a sign.

We started off towards Hay on the Radnorshire side of the Wye so that we could stop at Llowes where Roger Vaughan and Elizabeth Powel were married in 1753. The Church was closed, but there were some great views of the Black Mountains.

We went in to Hay because I thought I had arranged an appointment to tour the castle. My email communications were off, but we finally got it arranged by the end of the month. We did run into a wonderful children's parade for the local school.

We left Hay for a quick stop in neighboring Cusop, Herefordshire (We were right on the border of Wales and England). We returned to the Holy Yew. I'm still not sure why, but I will keep returning there as long as it and I stand (I think it will outlast me. It's still going strong at about 2,000 years).

We drove to Llanfoist without incident and checked in to our nice room above the pub at the River Inn down by the Usk.

We had a beautiful evening. First we visited the place where the Vaughans lived in 1844 according to the tithe maps that I helped digitize.


We stopped by churchyard where John's headstone monument is now restored. Then we had our adventure on the Blorenge. The pathway leads from St. Faith's Church where the replacement grave marker for John Vaughan (1789-1851) is now in place. And it crosses under the Brecon and Monmouthshire Canal on what was once a tram road. It was the passage to the industrial revolution from the Blorenge on West through the South Valleys.


We  found the likely place of Elinor Jenkins Vaughan's baptism in the canal in December of 1841. It was a glorious evening!

With light still in the late summer sky, we walked over the bridge to Abergavenny to see the Castle we had missed on our last trip.

Never trust a de Braose. They were one of the worst Marcher Lord Families. (If not the worst.) Norman Lord, William de Braose, invited all the local Welsh Princes to a Christmas feast in the castle in 1175. As it was a festive occasion, weapons were left at the door. At a signal, the de Braose retainers drew their own long knives and killed every last one of the Princes. Blood and gore for Christmas! And that's why we can't have nice "Happy Holidays!"

As we walked through Abergavenny, we noted the dragon door knockers. 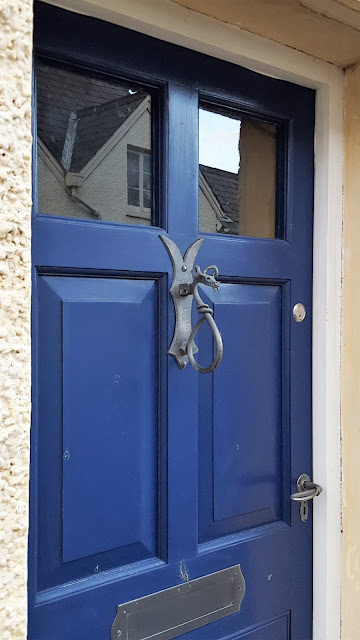 I'm so glad to have one of my own now, thanks to my wonderful kids!

We had visited St. Mary's Priory on the last trip where some of our noble ancestors lie peacefully at rest below beautiful stone effigies. But the sun was setting on the Valley of the Usk.

We walked back to the inn through the youth gathering for Saturday night festivities, both in the lower end pubs and some fancy dress party.