We woke early so we could get to church on time. It wasn't far at all by miles and the new "Top of the Valleys" is a nice, divided highway. Unfortunately, it was so new, it was still unfinished and when we got pushed off I missed the detour which was called something else like "way around" and we ended up way down by the Usk almost to Crickhowell before we figured out way back up to the to the top of the Valleys. We finally made it back over the mountains and found the LDS Stake Center in Merthyr Tydfil still before meetings began. The members were wonderfully friendly.

After church, we took our picnic over to Cyfarthfa Park, the former estate of the notorious Iron Master, William Crawshay. Now the park and "castle" built for the Crawshays in 1825 belongs to the people. A much better arrangement.

As we ate, we could look over the park and green valley of the Taff, reclaimed from the industrial wasteland of past few centuries that forged the steel and mined the coal for the "progress" of the world as they raped the Fair Country.


We were to arrive in Cardiff to meet up with our BYU Welsh Professors who, because stinkin' BYU won't authorize the Welsh Study Abroad Program, have organized in a corporate entity, British Expeditions. I give them high marks for inexpensive, student-style travel. We will see more about them as we go along.

But we still hadn't received the text of what the apartment address was for that summer. They use the same landlord, but are assigned different houses each year. While we waited for the text to come, and being only 25 miles or so from Cardiff, we decided to do more exploring around the Blorenge.

We arrived at the Blaenavon Work Heritage Site, commemorating the Welsh Industrial Age, in the midst of a Steam-Punk festival.

We were able to see the historical structures and I talked to some docents about my family connections there.

The iron and steel furnaces were built into the sides of the mountain so that the coal, lime, and ironstone (iron ore) could be poured in from trams on the top. The curse and blessing of Wales is that all three of those essential ingredients were lying around on the mountains. Soon, they had to start digging for them. There is no such thing as clean coal or safe coal. And iron furnaces were a different monster all together.

The furnaces had complex air ducts and systems to blow the fires hot enough for the chemical reactions to refine iron and then steel by further tempering with the right heat and mixes of the raw materials. The dross was burned away into acrid, poisonous gases through the smoke stacks and the more solid slag was hauled off. The hot, molten mixture had to be stirred. That was the duty of the Puddler, the profession of some of my ancestors.

At Blaenavon there is a representation of the iron furnace with the puddler stirring and then knocking loose the plug so that the molten iron flowed into channels to create lengths of pig iron that could be further molded or refined into strengthened steel. There was one long channel with several branches off that looked something like piglets suckling on their mother, hence, "pig" iron.

The impressive structure at Blaenavon is the multi-storied balance tower. It was used to lift the pig iron up to the top of the mountain where it could be transported down a tram road to the Garnddyrys Forge for further refining and molding. It worked on simple physics. There were two containers for water, also readily abundant from a reservoir on top of the Blorenge. above the water containers were bins for the pig iron. When a tank of water was filled at the top, it would drop and pull the other empty water container and full bin of iron on a pulley system up to the top where the pig iron could be unloaded onto a tram and then the water drained from the container now at the bottom while that bin was filled with iron and the container at the top with water as they kept the "balance" going up and down, over and over again.

There are also historical recreations of workers homes throughout the decades of production at Blaenavon. We were most interested in the example from the 1840s when my people were around.


We drove over the Blorenge and explored on the way down.

Halfway down the other side, we came to the site of the Garndyrrys Forge. It is part of the Blaenavon World Heritage Site and of interest to historians because it was abandoned in the 1860s. While the structures are gone, the footprint is the same as it was when it was in operation without it being modified into a more modern industrial operation.

It is of interest to us, because the censuses containing our family in the area from 1841-1861 indicate that some of them were "puddlers at the forge." Living in Llanfoist, it was possible to walk to work halfway up the mountain at Garndyrrys. It was the closest forge to Llanfoist and the farthest east in industrialized Valleys of South Wales.

Besides the stone outlines of foundations, depressions of reservoirs, and tracks of old tram roads, the principal feature of Garnddyrys today is the slag heap from the furnaces in its peculiar shape with the obvious name of "The Monster." No doubt our Vaughans added to that pile.

Another view of "The monster" looks across the Clydach Gorge and various paths of old tramways and mine workings can be scene. There was an arched tramway across a part of the gorge like the one at Merthyr that had stone houses built into the arches. That would have been an odd place to live and not at all restful for sleep as production was going day and night.

Without revealing any spoilers, some very dramatic events occurred in the Clydach Vale in the wonderful historical novels of Alexander Cordell,

Still not having received notice of our address in Cardiff, we went back into Abergavenny to visit the Castle Museum that had been closed the evening before. It was another deeply moving experience to see the Roman artifacts found in the neighborhood where my ancestors had lived, maybe as far back as Roman times.

We started out for Cardiff which wasn't all that far away. We waited at a very nice rest-area food-court until we got the text. Then we headed into town (the long way) and eventually found the BYU House in the Cathay neighborhood of University students and a diverse international population. Arriving with the professors, we were able to have our pick of rooms and ended up with a nice one on top with a bathroom right next door. It was an interesting garret room with a window that looked heavenward to the stars - usually clouds, and quite often, very loud seagulls perched nearby.

Still Sunday, but with an ox in the mire to get the house ready for students, we headed off for Tesco, the WalMart of Great Britain (even if there is another chain that is actually WalMart owned, but we never saw it). 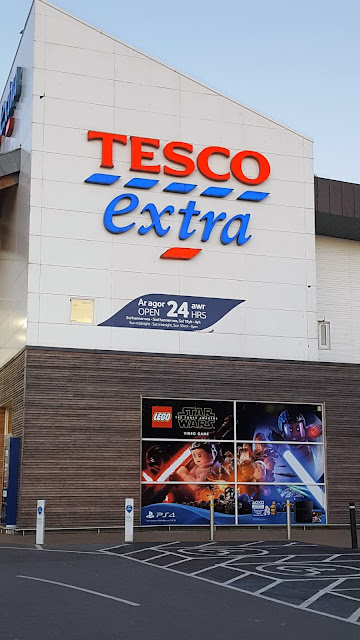 Sadly, Tesco, while having all the latest in Star Wars toys, is NOT open 24/7 as our professors had believed. It is closed on Sunday mornings and evenings.

We did find a store on the way back to BYU House that gave us the essentials for survival  (TP, etc.) until the next day.