Sigh. No doubt some of you have seen this going around the internets: 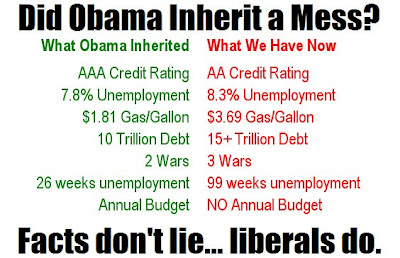 I could make a chart of my own including figures like this:

Weirdest one is "wars." It's all in the math. I'm sure if you simply added the "wars" in which the United States was engaged during each presidency, simple math gives you the 2 for President Bush and the 3 for President Obama. But if you count the wars started and subtract by the wars ended, math simple enough even for me to accomplish, you end up with President Bush: 2, President Obama: 1. Or, in other words, end/ongoing records of Bush: 0 and 2,and Obama: 2 and 1. Batting scores are Bush .000 and Obama .667. Oh, yeah, and how many Osama bin Ladens did W get?

I hope you see how silly this is getting. I really don't like political discussion turning into some kind of "rah, rah, win-one-for-the-team!" sporting event. I remember attending a UW Huskies vs. Hawaii football game when I was in High School and our band got to march at half time. The Huskies' fans (well, at least a couple of drunk ones) had this cheer imitating dogs lifting up their legs. Maybe that's why I don't like sports competition that much.

Some of the political turmoil in this country is the result of this competitive, entertaining, horse-race mentality. Actually, it's more like NASCAR just waiting for the next good-ol'-boy to crash and burn. (Oh, that one's easy. The Newt is on fire going down the track). And I admit, I find some entertainment value in that (especially in the newt crashing).

But I'm still looking for something better. President Obama hasn't fulfilled all his promises, but I still like the direction he's going better than any President in my lifetime (when I was old enough to vote).

It's not like I've picked a bunch of winners over the years. The first President I voted for was Ford (lost). Then I picked a winner, Reagan, twice, who led us into Iran-Contra - selling arms (to IRAN!!) for hostages to fund right-wing revolutionaries in Central America - Reagan conveniently didn't know or forgot, leaving Ollie and others to lie while they strutted in their uniforms - (but I'm seriously digressing). I actually voted for Dukakis (loser). Then Clinton who won and wasn't that bad of a President, personal failings aside, but I cast a protest vote for Nader (of all people) in '96 because I found the President's personal morals a little lacking and I couldn't vote for Dole standing next to that slimy newt. Then in 2000 I voted for Gore (winner of the popular vote) and in 2004, for Kerry, the last liberal from Massachusetts (even if I was pretty upset he had voted to authorize war in Iraq)..

I'd still like to give our current guy more of a chance. And I've laid out my reasons all over this blog. Feel free to comment and express views.

Support whom you will. Just spare me the posters in the tone of "Rah, Rah, Rass, Kick them in the other knee!"
at 5:12 PM