My first historical memory is the Kennedy assassination as I referenced here.  My first political memories come from the summer of 1964. That was an interesting year in politics. And my little memories helped lead me to my passionate moderate philosophy.

The first is rather vague but we were at the Washington Coast with some friends from Idaho. It must have been Kalaloch or Ocean Shores because the beach wasn't rocky. We found a series of arrows marked in the sand. 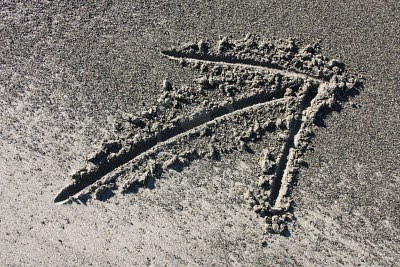 We followed the arrows to the edge of the waves where someone had written:

Now, I can't get any confirmation of this from family members who I think were there, but I seem to remember in the remnants of the mental processes from the little brain I had as a seven-year-old that the grown-ups scuffed out the "FOLLOW" with their feet and below the "GOLDWATER" wrote in the sand with a stick, "STINKS."

Apparently, my people were not part of the Goldwater wave of extreme conservatism.

They weren't exactly Johnson supporters either.

I tied down the second event from 1964 a little better from a talk with my dad and a successful archive search of the Seattle Times. But first a little context.

In 1964, Lyndon Johnson was President following the assassination of President Kennedy in November, 1963. As an incumbent, he was the Democratic Party's standard bearer and very popular right in to the election of 1964.

The Republicans, on the other hand, faced a contentious primary season principally between Barry Goldwater of Arizona and Nelson Rockefeller of New York. Goldwater was the very conservative anti-communist, anti-government, and anti-Civil Rights standard bearer who rode a wave of grass-roots public support connected to Libertarian ideals mixed with the right-wing views of the John Birch Society types. Rockefeller was of the main stream tending to liberal, blue blood, East Coast Republican elites. And he had a slight personal flaw in the eyes of some in that he had recently divorced and remarried.

The Goldwater populist wave, and Rockefeller's perceived flaws, swept Goldwater through the Primary season. Yet in late Spring of '64, the moderate Republican governors ("moderate" Republicans, sigh, those were the days!) attempted to rally in a Stop Goldwater movement. Their candidate was William Scranton, Governor of Pennsylvania. I was glad to pin down a a date finding this article: 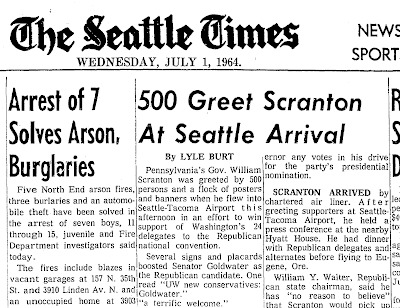 My dad says that we went as kind of a fun adventure. He had heard that Scranton was coming to Seattle so we went out to the airport to see a political celebrity. We waited at the chain link fence and the organizers handed signs for us to hold. When the group deplaned, Mrs. Scranton came over an appeared to be charmed by my little brother and me. She said something like, "With supporters like these, how can we lose?" Well, they did.

My dad was good like that. While we've had our differences over the years (mostly in more recent years) he shared with me those adventures in politics. He took me to a Democratic picnic in Pocatello to meet Senator Frank Church. He also introduced me to Republican Congressman George Hansen a few years later. I don't think you could find two politicians more diverse, at least not in Idaho.

So, Dad, thanks for that. I really do appreciate the introduction to passionate moderation.