It was sad to break the fellowship of British Expeditions 2016. As our time wound down, Professor Tom headed off for an adventure hiking the Pembrokeshire coastline trail. The rest of the group had a drawn-out farewell in Cardiff.

First we went off to the National Museum Cardiff. What a place! Dinosaur bones to masterpieces of art! And am ddim! (free entry).

No, I think this was my favorite:

Or maybe this one:

Then I was very moved by this piece:

As should be obvious by now, I am a sucker for knights and castles. What struck me is the contrast between the romantic ideal of the knight crusader and the very realistic soldiers of the Great War (WWI) trudging through foul weather. The foot soldiers could have been portrayed in heroic pose like the knight. And on the actual Crusades, I'm sure it was mostly trudging through mud, blood, and gore; well, a lot of hot sand and boredom too.

On a brighter note, we return to possible familial connections.

I mean, don't you feel at home when you find your family name up on the wall? Wrth cwrs! (of course!)

Our group in front of the National Museum Cardiff 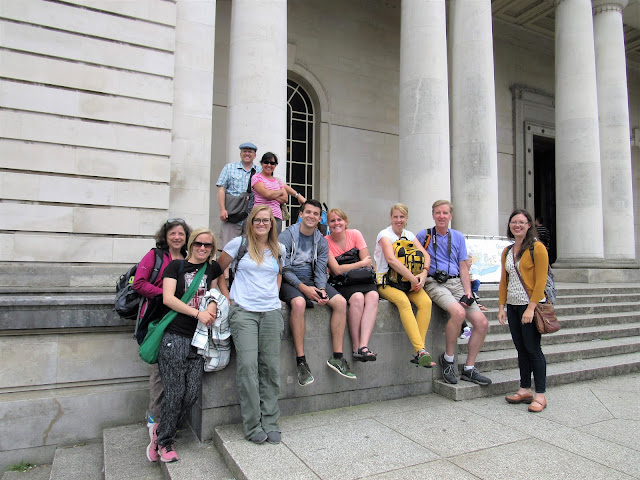 And we had an official farewell luncheon at a local pub. 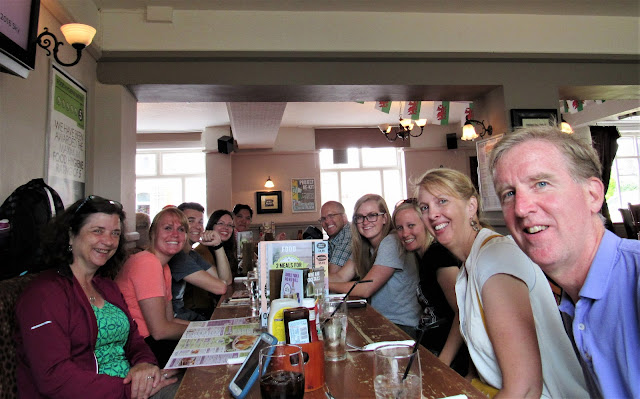 It was during our meal that one of the young women said that she had to get one of those t-shirts that said "Simmer-moo." "What does that mean, anyway?" she asked. We explained that "Cymru" was the country she had been living in for the past month. She was not from BYU but another school in Utah that shall remain nameless. She was not there for the Welsh language study, but a great pal otherwise.

After lunch we split up to pursue our own interests and souvenir t-shirts. My wife and I took the long walk from downtown Cardiff to Cardiff Bay. (You can catch a bus, train, cab or whatever).

First up was the beautifully unique Wales Millennium Centre, a performance venue. The large words reminiscent of a Roman triumphal monument say in English


IN THESE STONES HORIZONS SING

which in English means, "Creating Truth Like Glass From Inspiration's Furnace." Which is kind of cool that they are both powerful poetic statements and not a direct translation of each other.

Next up was a site not to be missed, Eddie's American Cafe. I have a thing about not buying cuisine from home in foreign lands, so we didn't eat there. But I did ask if Clara, the Impossible Girl, was working that day, but . . . alas!

Then the Welsh Assembly. Cymru has an Assembly with less power than the Scots with their Parliament. But the Welsh still have better modern architecture.

And here's view of some of the landmarks at Cardiff Bay including the red brick and stone Coal Exchange from the 19th Century when Cardiff Coal ran the world (at least the British Navy). Fortunes were made here while men, women, children, canaries, and ponies died in the pits.

We visited the Norwegian Church relocated to be preserved at Cardiff Bay. There was a community of Norwegian sailors and their families in Cardiff including one family named Dahl that produced a son with a great literary imagination. There was a small corner in the church commemorating the 100th Anniversary of Roald Dahl's birth in Cardiff.

We had our little Doctor Who experience without paying for the whole commercial Experience. The lobby and gift shop were sufficiently entertaining. We probably spent enough on souvenirs that we didn't save much but both would have been too much.

And so we bid Hwyl! to a beautiful day in Cardiff. 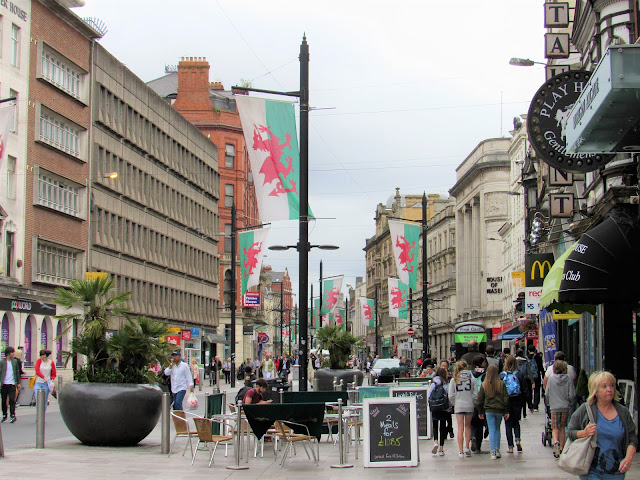