We had a morning appointment to arrange for a replacement monument for the grave of our 4th Great Grandfather, John Vaughan (1789-1851). The place was in the outskirts of neighboring Newport. Across the street, I noticed a Reliant Robin, the amazing three-wheeled British car! I went over to snap a few pictures at various angles. A group of tough looking mechanics came out of the garage and demanded to know why I was taking pictures. I explained that I had never seen a Robin before except for, you know, that show about cars on TV.

"Top Gear," one of them said, and we all started to laugh which defused the situation to avoid me becoming a rugby ball.

After talking with the monument people, we headed up the valleys. I dropped off my wife in Caerphilly so she could check out that castle's gift shop and stroll the town while I went up to Ebbw Vale where Gwent Archives sits on the site of the former iron works.

And I have to refer you to the blog piece I already did about Ebbw Vale. I didn't stay long so as not to leave my wife stranded in Caerphilly. We had arranged to meet in the car park of the supermarket across from the castle. Imagine going grocery shopping next to a castle!

The BYU House custom is to gather all the left over, usable food at the end of the month and give it to the Mormon Missionaries in town. We had told them at church the last Sunday that we would be the last ones in the house, so they were to come by that night. My wife, thinking that the leftovers were not sufficient, had us stop by Tesco to buy up a bunch of stuff she knew Elders would like to have (from many years of experience and our own college kids); things like boxes of kids' cereal, etc.


When the Elders came into BYU House, which with thought was adequate, if a bit Spartan, student apartments, the said, "Wow! This is so much better than our apartment!" Yeah. I know how it is, Elders.

Walking to a place to eat that evening (we had given away all the food). I tried to capture some of the street art in the University section of Cardiff.

All packed up, we slept a simple night covered in our jackets with our travel neck pillows . My wife said she was glad to be going home. I said that I would rather stay.

Up early to drive to Heathrow (with no problems, I might add), Cardiff bade us farewell. 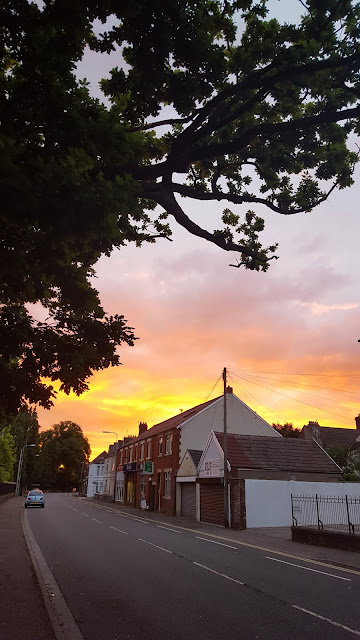