Hiraeth 2016: Dydd 12--Seeking the Welsh in Oxford (and the Cotswolds)

Once more over the Severn Crossing, we headed to the nearby Cotswolds. The first stop was some little church I'm going to need help with in remembering the location (all I had to do is Google "hobbit door church in the Cotswolds"). It is in Stow-on-the-Wold, Gloucestershire at St. Edward's Church.

Then we stopped at Bourton-on-the-Water, Gloucestershire.

Most of the day was spent in Oxford, the University City.

Our walk into the city center led us right by the famous police station of Inspector Morse (and Endeavour, the prequel series).

My wife was naturally drawn to the British bakery we passed.


Then we saw another landmark familiar from Inspector Morse. The Radcliffe Camera, a Science Library where people in TV shows and real life seem to be always parking their bicycles.

We went to the Bodleian Library where we saw the incredible medieval ceiling. Yes, also a location for filming Harry Potter.

It was in the Bodleian yard that I found our first Welsh connection. Apparently the Earls of Pembroke were benefactors of Bodleian. If you look in the far upper left of the armorial, you will see the Herbert crest that was established by William ap Thomas (Herbert) who built Raglan Castle.


The museum around the corner from the Bodleian was great! I found a display in the basement (of course) about Alchemy reminding of my distant cousin, Thomas Vaughan.

By the way, Nicholas Flamel was a real person and Alchemist. Look him up in the restricted section if you dare!

For the more solidly scientific, although I think the epistemological lines of Alchemy and Science do intersect at some point, we also found a  preserved blackboard from a guest lecture by Albert Einstein from 16 May 1931.

So it was off to find Jesus College where the Welsh studied. Sadly, it was all locked up but we were able to identify it by the crests. 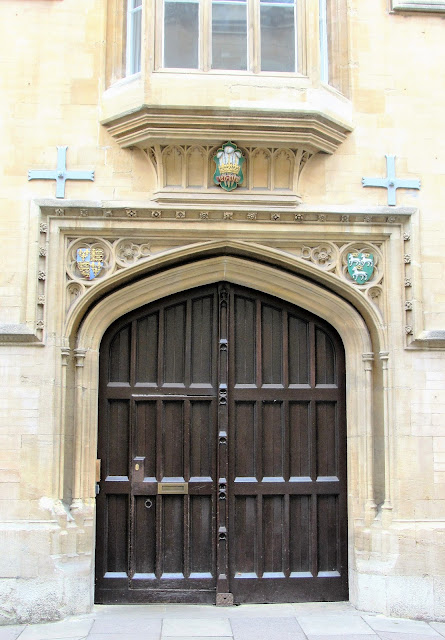 Above the door is the "Ich Dien" ostrich plumes of the Prince of Wales (and Welsh Rugby). On the left is the royal crest as Queen Elizabeth I, a Tudor, established Jesus College. On the right is the Jesus College crest of three white stags on green.

We went off to explore what we could see of Merton College where J.R.R. Tolkien was a fellow.

As we did in London, we were scheduled to be at Christ Church for Evensong. It got us in through the quad with careful monitoring by the Porter. We did not take pictures in the church but did in the Quad.

After a beautiful evensong, it was back over Severn Crossing and home to Cardiff.