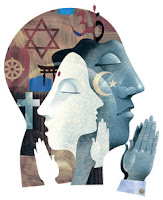 My wife asked for my help as she is working on a national committee drafting new handbooks for a certain youth organization of boys that shall go nameless. (But if it still exists in a few months and the handbooks get published, I'll let you know what parts are mine.)

This specific assignment was to draft up a couple of lines about religious heroes in America. With my passionately moderate bias to be inclusive and diverse, I found that to be a rather difficult challenge. I mean, we didn't even let Hindus into this country until 1965! Sometimes the realization of how far we fall short of our ideals that are more often taken for granted than actually accomplished is staggering.

Well, it's late and my product isn't great. Fortunately, it will go through editing by my wife and one other collaborator before it even makes it to the committee. But you can let me know what you think. Remember, this is intended for young boys - think eight-year-olds - some of whom may have had very little religious background of any kind:


Roger Williams started the colony of Rhode Island so he and his friends could have a church like they wanted. He was a friend to the Native Americans and wanted the Slaves to be free.

Father De Smet was known as “Black Robe” by the Native Americans. He was a Catholic Priest in the West and made friends with Native Americans, Mountain Men, and Pioneers of all kinds of different religions.

Narcissa Whitman and Eliza Spalding were the first European-American Women to cross the Rocky Mountains. They went with their missionary husbands and they helped many Native Americans and Pioneers.

The Sze Yap Chinese-American Society in San Francisco established the first Buddhist Temple in America in 1853. Unfortunately, many other Americans did not understand or welcome Buddhist people for many years.

Abraham Lincoln did not go to any particular church but he had a strong belief in God that helped him decide that all men should be free and helped him win the Civil War and free the Slaves.

Brigham Young was a pioneer leader of the Mormons or Latter-day Saints who helped establish many settlements where they could practice their religion in the desert country of the western United States.

Jacob Schiff, born in Germany, became a successful businessman in the United States and worked hard to help many Jewish people come to America between 1880-1920 and to make them feel welcome here.

The Reverend Martin Luther King, Jr. relied on his religious faith in his non-violent struggles for equal rights in America. Many were inspired by his work and speeches. Sadly, and like Abraham Lincoln, he was killed because of his beliefs.

Cesar Chavez relied on his Catholic traditions in his work to help Hispanics and migrant farm workers to promote civil rights and respect in America. He also used principles of non-violent protest and developed the slogan, “¡Sí, se puede!” (“Yes! It can be done!”)