My Boy Works for the Big Mouse

There are a lot of criticisms one could make of the Walt Disney Co. from the ruthlessness of its lawyers in protecting trademark to the personality quirks of ol' Walt himself. The best parodies are to be found on the Simpsons, or maybe the Rocky & Bullwinkle Fractured Fairy Tales version of the man with the dream of making money off of Sleeping Beauty. And sure, it's just entertainment - sometimes expensive. But no one can doubt the influence Walt and his successors-in-interest have had globally at least trying to make people happy. And most of the time, it works.
We visited Disneyland last Monday. We wandered in with the Spring Break crowds and casually ended up at my favorite ride, Peter Pan. Waiting in line I overheard the people speaking Portuguese behind me. I turned to the middle-aged couple and asked, in Portuguese, if they were from Brazil. (I sort of could already tell. And I think it's polite to let people know you understand them when they are speaking a rather obscure foreign language right next to you - just in case.) We had a pleasant visit. It reminded me that Disney has characters, besides Joe (or "Zé" Carioca), unique to Brazil and I assume other Portuguese speaking countries. And according the Wikipedia, he is known in other languages as well. 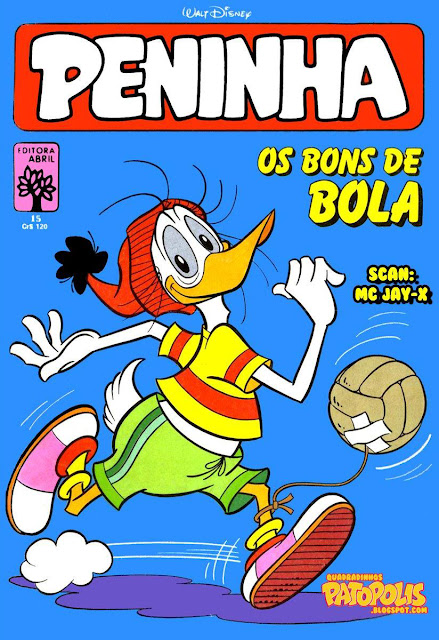 Brazilian comic books are pretty inexpensive. Peninha ("Feathry Duck") and many others are well known. And they've brought joy to millions even if they are unheard of in the U.S. Is there anyone in the world who hasn't been touched somehow by the Mouse? Probably only if they've never heard of Coca Cola either.

Disneyland is full of families. I was surprised to see so many infants which we noticed as grandma and I were helping with our little granddaughter princess. Babies can go on most of the rides (Splash Mountain and a few others excepted). Our princess even likes Pirates of the Caribbean! (The ride they based a movie on then changed the ride to be based on the Movies. I wonder how weird it would be for Johnny Depp to go on that ride now?) We saw a lot of Mormon families - the ones with several kids and the occasional BYU logos among other clues. Someday with a little research, I may delve into the Disney-Mormon cultural connection.

It was also great to see how many disabled people were there including many Down's syndrome kids and adults. They accommodate them so well in the Park and even on so many rides. We ended up in the slow line with wheelchairs for "It's a Small World," but that was OK because it was so moving to see the people so well taken care of. And criticize the annoying tune all you want, but those wonderful people and babies really like it.

The first time I went in 1970 was with my parents and family. I went the next year on a Scout expedition on the way to Philmont, New Mexico. Costumed Mickey even broke character briefly to tell us from inside the black mesh eyes that he had been a Boy Scout but didn't make Eagle because he couldn't pass his swimming merit badge. (It wasn't the squeaky voice either. I don't think the character will be fired as that was way long ago and my report here shouldn't get anyone in trouble.)

I've been a couple of times since when my kids were younger and the Park has adapted to the times so well over the years. We've still never made it into California Adventure, but we wandered Downtown Disney where my boy bought us some sweets also built where that huge parking lot used to be.

Throughout the day my son was telling me about the training he has received with this new job - the Mouse's way to infuse the Disney culture on the employees. They are always on stage, even as a statistician, and smiles are required. Safety is concern number one. They promote a lot of other values too and I lost track of much of the Disney training. But it isn't bad. You can check out more of it at the Mouse's website. I went into government service on the perhaps mistaken idealism that I wanted to do some good in the world. The Disney Company is sure trying as well.

As a big and bad corporation, The Disney Company makes a great effort. The Disney Mission Statement:


"The mission of The Walt Disney Company is to be one of the world's leading producers and providers of entertainment and information. Using our portfolio of brands to differentiate our content, services and consumer products, we seek to develop the most creative, innovative and profitable entertainment experiences and related products in the world."

At one point in the Disneyland experience our little Princess threw a fit when she realized her mom & dad were no longer with us. Grandma lovingly outlasted her and the Princess went to sleep in her arms. My wife said to me, "Disneyland is all about waiting in line with people you like."

I texted that to my kids  while they were waiting for more exciting rides with less annoying music and told them it was going on the blog. So there it is.

"Happiest place on earth?" A great logo and goal even if I've been happier perhaps in certain personal, family, and spiritual occasions with eternal perspective. But there's nothing wrong with the Mouse trying to make people happy.