My daughter just went to a conference to San Antonio. I suggested to her that she mess with Texas a little if she got a tour at the Alamo. The ideas were to ask about the Slaves and what was the Mexican government's view of Slavery? Or at least to ask where the basement was.

She reported after the trip that she did not do the messing I was attempting to encourage. Instead, she brought me something from the gift shop: 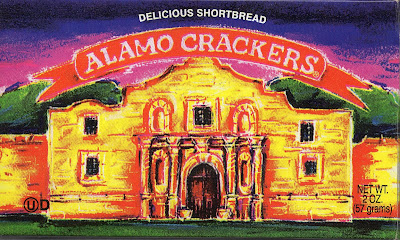 And the back of the box: 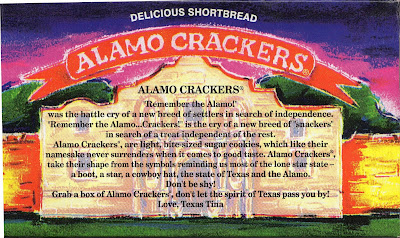 The box is the size of a box of "Animal Crackers." So that is apparently the joke. There are other meanings of the word "cracker" that I don't think were intended as they could lead to some more negative connotations even if they could be a little payback for the Texas Republic founded on Slavery after Slaves were smuggled into Mexico. The undefined boundary that came with annexation to the US led to the questionable Mexican-American War. Oh yeah, and Texas was on the wrong side of the Civil War which I'm not sure they've completely figured out yet as Governor Rick Perry still talks about secession.

Yeah. I don't like Texas that much. A lot of good people live there including a couple of cousins whom I really like. And I've been to the Temple in Dallas along with the School Book Depository Museum. I still think El Paso should be part of New Mexico. And I can't ever go to Del Rio because there's a federal magistrate there who has it out for me because when she was an Assistant US Attorney I (with Washington backup) successfully called her on a federal grand jury run amok and that's all I'll say about that.

I guess I've messed with Texas enough. No sense encouraging my kids to do so.