We heard the Sunday Afternoon session on the radio as we had made it to Mesquite, Nevada. There was nothing in the deadly desert of California to pick up on the radio. Conference sessions and talks are all uploaded on the Church's website already. Transcripts will soon follow. There are also highlight clips of talks that I particularly liked. Click on the pics to see video and read the excepts:

President Uchtdorf also said, according to my notes:

We are diverse in social, cultural, & political differences - the Church thrives when we acknowledge this. (emphasis mine).

And then there is President Monson concluding with this:

Did you get that?

"May we be tolerant as well as kind and loving to those who do not share our beliefs and our standards." (emphasis mine).

I think that trumps whatever anybody else may have said about tolerance.

And I picked up some Disney-Mormon links. First there was this circling Facebook this morning about the new General Young Women's Presidency: 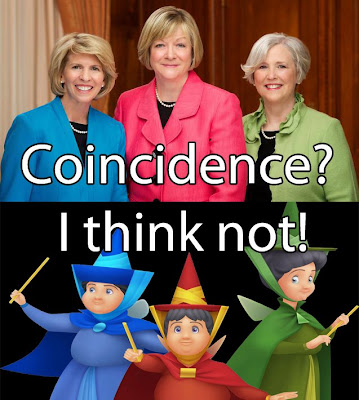 I'm sure it is just a coincidence that the dress colors sparked the connection in someone's mind, but still . . . .

Elder Robert D. Hales of the Twelve spoke in the Priesthood center about bearing the Shield of Faith against the fiery darts of the adversary referencing Paul's counsel in Ephesians to "Put on the whole armor of God." Which brings me to a picture I took last Monday at Disneyland just waiting for a chance to use it here. Thanks, Elder Hales! 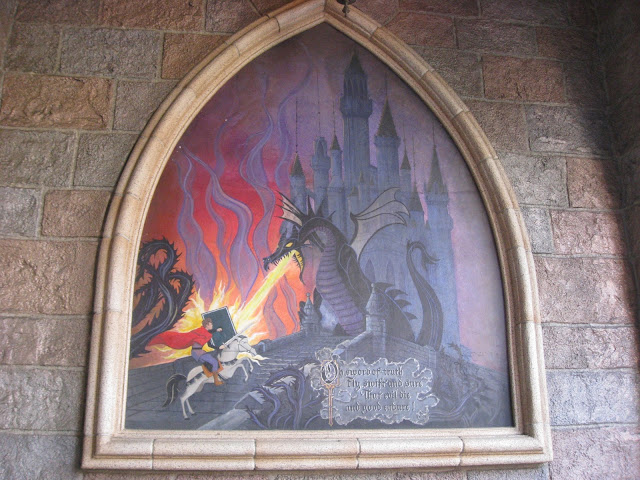 The very same Good Fairies above (the ones from Sleeping Beauty not the Young Women's General Presidency) gave Prince Phillip his Sword of Truth and Shield of Virtue with which he destroys evil in the form of the dragon Maleficent becomes.

The Sword of Truth and Shield of Virtue are abbreviations of Paul's Whole Armor of God. Yet there is no doubt that Disney was influenced by Christianity if not specifically Mormonism. Don't forget the Prince's Shield of Virtue: 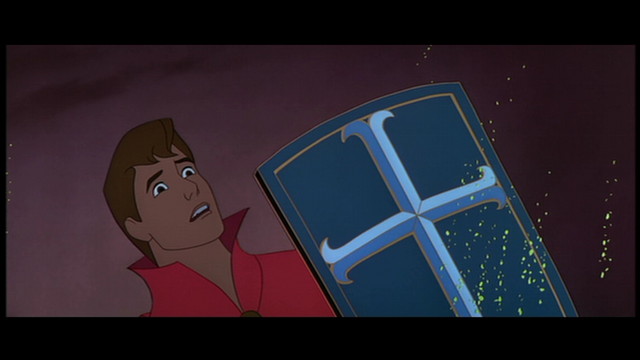 Yes. A Crusader's Shield. Readers will know my admiration of the ideals and fear of the abuses of the Crusader mentality. Even Walt was not exactly PC with some of his views and artistic production (American Indians in Peter Pan, pretty much the whole movie Song of the South, etc.) I imagine he was probably pretty WASPy and a product of his time. So is it fair to judge him by current values? The good he did should count for something against some cultural failures he shared with many of us.

The point being is this, and I strongly endorse Elder Holland's full talk, there are symbols of truth and righteousness all around us if we understand the message. I like the imagery and concept of a Sword of Truth. Both classic definitions of faith indicate that Faith is belief in things that are not seen but are True. Alma 32:21; Hebrews 11:1. The only way to be sure of the truth we cannot see is to rely on God's Holy Spirit to witness to us and to prove the truth by the fruits that are produced even if some are not evident until we endure to the end. See Holland, above.

As J.R.R. Tolkien and his friend C.S. Lewis frequently discussed, there are myths and there is the True Myth of the Miracle of Jesus Christ risen from the Dead with power to raise us all. In fact, many of the good principles of human myth will point us to the True Myth. Tolkien and Lewis even had a sectarian difference in their applications - one being a devout Catholic, the other an Episcopalian convert. They exercised tolerance with each other.

It's a tolerance I like to promote with all my human contacts whether within or without my own belief system. All I ask is that they do the same for me. They may not. And that will not stop me from trying.
at 10:53 PM