Among the First of the Welsh Converts

My Welsh DNA is fairly sparse - but then, there is the issue of my surname. My Vaughns came to Zion in 1887 - on the train. Of course they married into some prominent pioneer families, myself inadvertently going perhaps the farthest with that by marrying a Kimball. At the time, her family name was the least thing on my mind. And I'm trying really hard not to be boastful or proud. But there seems to have been just something, maybe part of it self-imposed, that treated the Vaughns like second-class citizens in Zion.

The first Vaughn over died young and left a family in poverty. His son married and there were troubles in the family. His wife divorced him after the children were pretty well grown. Their oldest son, my grandfather, was never active in the church as an adult. It's a miracle my dad & siblings were. Grandma wasn't active either. She just made sure the children went. My dad and mom were married in the Temple and here I am.

There is a theme running here of faithful women propping up the Vaughns which brings me to . . .

Checking my blog for what my readers were searching, I noticed an interesting one looking for "Mormons in Llanfoist." Well, naturally they hit my blog. But I went to their search and saw something else - a link on BoAP to History of the Church, Vol. VI, and an 1844 conference in England with representatives from the Garway Conference including branches in Llanthony, Abergavenny, and Llanfoist! How could that be? Abergavenny is a substantial market town, but Llanfoist had 400 people in the 1840s and not much more than that today. Llanthony is that place up in the top of the mountains with the ruined abbey - less than a village.

Turns out John Needham, an 1838 British convert baptized in the River Ribble, was the first missionary in South Wales. And Needham's missionary journal is digitized and on-line at the LDS Church History Library site. I went through all 258 pages that night. 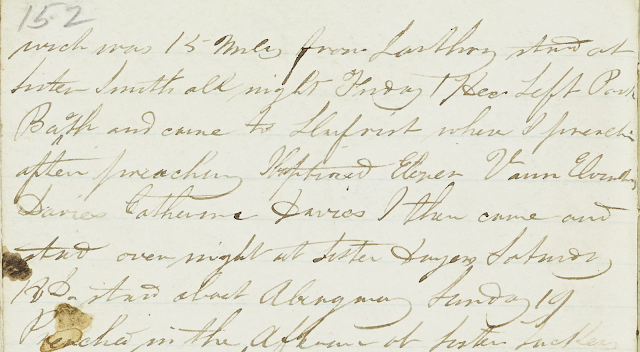 "after preaching I baptized Elinor Vaun"

Besides our known Elinor Jenkins Vaughan, the one born 1784 on Stowe Farm where I herded cattle on our visit to the Marches in 2010, there is only one other Elenor on the 1841 Census for Llanfoist Village - Elenor Meredith. Elinor "Vaun" is a match. Later, Elder Needham refers to another baptism of a "Sister Vaun" - no first name, likely the daughter, Catherine. And there are a couple more reports of "Sister Vaun" including that she washed the missionary's feet (just the dusty part of the "beautiful upon the mountains" bit).

This Elinor is the grandmother of our Vaughans who joined the church 40 years later in Durham, England, and came to Utah.

It can't be a coincidence that Pres. Garff of the Bountiful Temple set me apart that same day of the research as a veil worker. He specifically referenced D&C 84:20 about the power of the priesthood being manifest in the ordinances - and blessed me with the Spirit of Elijah to turn my heart to the fathers (and mothers) and they to me to help me from across the veil - "the most sacred place in the temple" - (his words).