Elder Harry Reid Rising Up to Save the Constitution 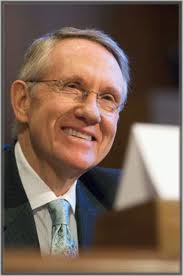 Who'da thunk it? Yep. That's Elder Harry Reid, Senate Majority Leader of Nevada, faithful Latter-day Saint, now acting to save the Constitutional authority of the Senate to advise and consent with Presidential appointments by democratic, majority rule - well, sorta democratic as smaller-population states still have greater power in that august body under the Constitution.

The Constitution also allows for the Senate to set its own procedural rules which is all he is considering now. Filibusters have great historical tradition, but they are only under the rules, not written into the Constitution itself.

In an odd way, this is the inverse of the problem post-Civil War. Congress passed the silly and ultimately-ruled unconstitutional Tenure of Office Act which in their fights with President Andrew Johnson (and over his veto) required "advice and consent" not just on the selection but on the dismissal of presidential appointees. It was violation of this law that got Johnson into impeachment trouble. He was impeached, like Clinton, but not removed from office as the body politic saw this as what it was - a power play.

Senator Reid is not calling for the prohibition of all filibusters, paper or otherwise, just those blocking presidential appointments in the Executive Branch. The Senate is still free to filibuster judicial nominees and any legislative bill under the rather arbitrary 60-vote cloture rule. Remember, the Constitution only requires super majorities of 2/3 for treaty ratification and overriding vetoes. I know that's hard for the little brains of some in the Munchkin Caucus (tea party) of the Republicans who think the Constitution is only portions of the First, half of the Second, and an overblown exaggeration of the Tenth Amendments - especially ignoring the Supremacy Clause of Article VI, but we'll leave that for another day.

Instead of my poor verbiage, let me turn it over to a real Statesman, the Majority Leader of the Senate, the Honorable Harry Reid of Nevada:

Senator Reid at the Center for American Progress, July 15, 2013, transcribed by the Washington Post.
at 5:46 PM