Classic Filibuster - Drone on the Drones!


I caught some tweets and news clips of an unlikely hero (of mine), Sen. Rand Paul (R. Kentucky). I've been hard on him in the past and probably will in the future as I have just found one and only one area of agreement. And that is opposition to the Drone War. It's also the one area where I have strong disagreement with President Obama. He should know better. And my optimistic idealism leads me to hope that it is all part of a grand strategy to have it cut off before the end of his second term, hopefully with a clear decision by the Supreme Court so no President will ever do it again. (One can dream.)

It was fascinating as an old style filibuster with the Senator on his feet only yielding for questions (in the form of drawn out speeches ending in a question) by pre-arranged associates who would carry on the filibuster. Mike Lee (R. Utah - groan, now he does something I like), Ted Cruz (R. Texas), Jerry Moran (R. Kansas), Marco Rubio (R. Florida - who told him to keep his water close by), Saxby Chambliss (R. Georgia), John Cornyn (R. Texas), and Pat Toomey (R. Pennsylvania), [and John Barrasso (R. Wyoming)] - a regular tea party jamboree!! And then, and this is a big deal, Ron Wyden (D. Oregon) - one of my heroes for other reasons! (Mostly which I can't go into until I retire).

As I say, I only caught pieces as I was trying to do my work. And reading afterwords my hunches were confirmed that the filibuster was a repeated rehash of the same thing over and over. What are the President's standards for killing American citizens with drones? Will he do it on American soil? Initially there was discussion of some vague answers from nominee for CIA Brennan and Attorney General Holder (who I think is kind of a jerk). But apparently he [the AG] finally said that it wouldn't happen on U.S. soil. That doesn't answer all the questions, though. While the Repubs kept beating up on Holder (Brennan generally ignored in the droning), the Dem, Sen. Wyden, was giving slight defense for Holder on his interpretations of what he said while holding firm in support of Fifth Amendment rights and the Bill of Rights as a whole to condemn the drone war.

One of the most fascinating things, and I probably should read a full transcript (but it was five [nine hours and going]!) was that the tea party senators were arguing this on "balance of power" grounds among the three branches of government. I'm pretty sure I even heard Paul and Lee say that only the Supreme Court could decide what was Constitutional - not the President or the Attorney General. That actually is a big WOW! as that is not a firmly recognized principle among all the die-hard right-wingers, many of whom formed up in the tea parties, that the Supreme Court can even interpret the Constitution. (Apparently in that view, only people who can channel the dead founders can do that).

Paul stayed on his feet the whole time as the traditional filibuster rules require. And with some maneuvering around 5 p.m. with Senator Majority Leader Reid attempting to close for the day and set up for a cloture vote, Senator Paul stood his ground and has the floor tomorrow morning [tonight] to keep going. Let's see how this goes and how many more people can see the Drone War for what it is - a threat to our Constitution and Bill of Rights.

So my hat is off to the tea party Senators who were not arguing against taxation as an evil per se, promoting states rights, cherry-picking statements of the Founders, or personally attacking the President, or even accusing anyone of socialism/communism/fascism [oops. Paul played the "hitler card."] This was a [mostly] refreshing, and long absent view of what the Senate is supposed to be about. Let's hope this keeps going and their sister chamber and the rest of the branches of government of, by, and for We the People can step it up a notch.

And it's a good test of the supporters of the Drone War in both parties - the neo-cons should fade away for good.

And stop the Drone War!

Let me add a few more observations. This is not great oratory as in the old days. Currently, Paul is still holding the floor and his only back-up (closing in on 10 p.m. Eastern) is Senator Barrasso (R. Wyo.), not the  most solid brick in the wall. They are simply repeating themselves over and over which at least is better than reading from the phone book as the segregationists sometimes did. Likely there will be someone else come in to spell off Barrasso. Paul has to stay.

Some commentary is saying that this may actually draw more attention to the abuse of the filibuster than to encourage more of this type of showmanship. I agree with their issue and am fascinated by their daring. And I hope as this makes the news that people will think more about the Drone War. And maybe it will help some Senate Rules reform.

This unlimited war started under the W Bush Administration and continued, even heightened, by President Obama as he ended war in Iraq and is drawing down in Afghanistan. Drones don't risk injury to our troops. Most conservatives, at least of the neo-con variety, have no problem with the US wiping out Muslim terrorists under whatever condition or method. Many supporters of the President are nervously silent. True Civil Libertarians are asking the same question as these tea party Liberpublicans (or Republiterians). I guess that's where I find myself, not with the tea party Libertarian philosophy but with the Civil Libertarians. And it is good to find common ground on this issue.

And now (11:20 Eastern) Sen. Rubio is just taking partisan potshots at Dems. I'm just going to watch some Dr. Who.

The thing is, if the President answers their question as he should that it is unconstitutional to target U.S. Citizens with drones within the United States, then it will be a constitutional determination made by the Executive and the Senate, not the Supreme Court. So does that make the determination weaker as a constitutional precedent with out the Supremes? [But then the Courts would only hear a real case or controversy and we don't want to send a drone in on US soil to blow up someplace just to create a test case. But families of American citizens killed elsewhere (Afghanistan, Yemen) could sue.]
_________
Much later, same night.

It ended about midnight and I didn't quite catch how. We'll see it in the news reports eventually. It's midnight here now, and while I do support their cause of bringing attention to the Drone War, I am no longer sure I am in favor of the method. It was an old-fashioned filibuster to grandstand a point. While that may be the Senate's prerogative, do we really want that on whatever point this small group of mainly tea party types want to emphasize? An anti-tax filibuster? A give-away of the public lands? A cherry-picking the founders tirade? A filibuster on a budget or debt?

I think this may give Majority Leader Reid and the Senate as a whole a chance to think about what they may want to do with Senate rules on filibuster and cloture and return to more simple majority votes as set out by the Constitution (as amended, 17th Amendment and all).
__________
Adendum
March 8, 2013

So Ron Paul got his letter: 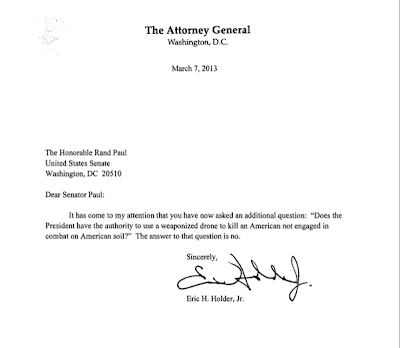 Now we need to know about Americans in other countries, and then non-Americans outside of "war zones" and what our "war zones" are, exactly.

Senators McCain and Graham are bozos.