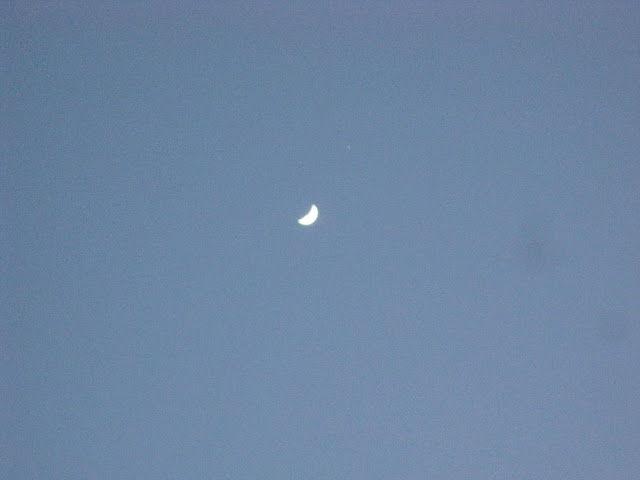 My children, their spouses, and wife who are much more science-oriented than I said that this was an important astronomical event and for me to go take a picture. So, there it is. The moon and just above and slightly right is supposedly Jupiter. My little, digital, pocket Canon seems to have picked it up.

Once I had the picture, they said I should put it on the blog. Apparently, this is big deal on space-watching websites along with science-oriented people in general.

The best part for me was that at dinner our Grandson asked why we had a Japanese flag hanging in the family room. We talked about our sons who had been on missions, their uncles, and that's why we had flags for Oregon, Brazil, and now Japan among our collection. The Japanese flag is for their uncle soon to leave for Nagoya. One of the adults pointed out that we already had an Oregon flag before the mission. I explained that's because I was born there, so we had it all ready for their uncle's mission. When my four-year-old Grandson got in the car to go home, he told his parents he was going to Jupiter on his mission.

Good thing we got a picture. Maybe we could make a flag out of it.
at 8:40 PM