The Dems Give Me A Picture! 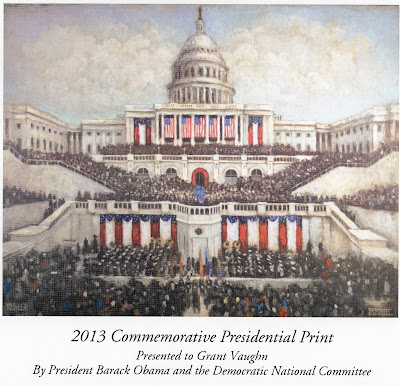 Good thing I have a library to hang it in!


This came in the mail today! Not sure exactly how I was so privileged except that it came with a solicitation for donations which I threw away. My wife and I have a policy not to contribute to politicians because it just tends to encourage them. She won't even check the box on the income tax returns! But that's OK because she's still a registered Republican.

My modest "donation" is only to purchase campaign buttons to continue my collection. And I'll fess up that I buy the official stuff from the Democratic campaign and I go to some commercial outlet for the Republican candidate so as not to make an actual donation. I didn't even make calls last year for the President like I did for Senator Obama in 2008.

However, the Dems did know that I cast my early vote for the Prez - they called and asked with that excellent ground-game and all (even in Utah!!). So there is that. And I don't feel guilty taking the picture without making any contribution. We even use all those return mail stickers that charities keep sending.
at 5:30 PM