Even though I have been to Garnddyrys before, even been by several times, I had to go back. I needed photos of Garnddyrys Row where a 4th-Great-Grandmother had lived and died in 1861. Garnddyrys is an important part of the Blaenavon World Heritage Site because while it was abandoned in the 1860s and much of the equipment and even stonework re-used elsewhere, the footprint of the industrial forges and housing is just as it was back then.

If these stones could speak! 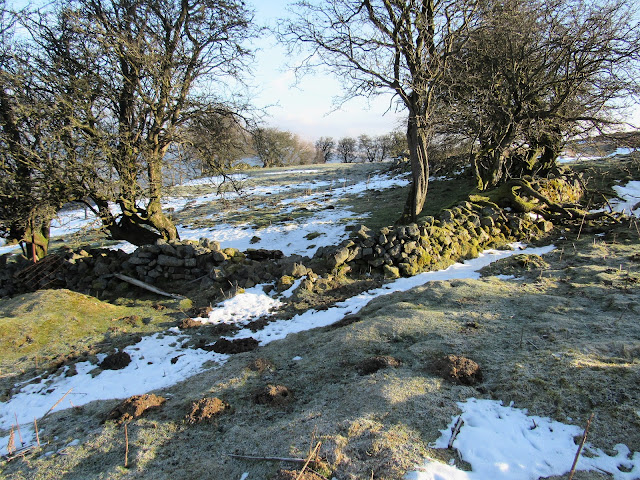 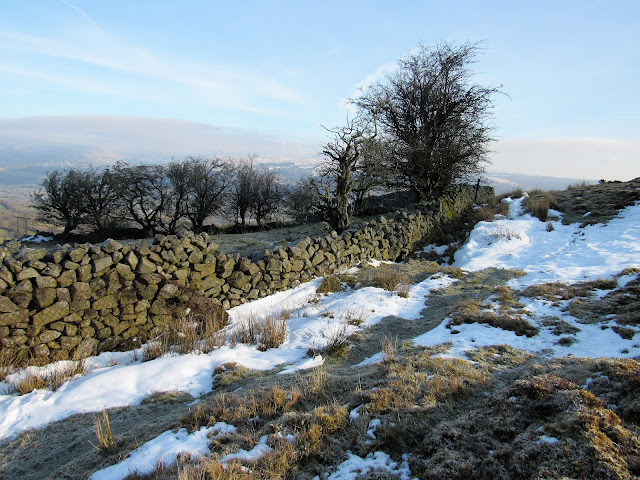 At the bottom of Garnddyrys Row, which is more of a 3/4 rectangle than a row, the old tram path took off towards Llanfoist. The road calls and I must follow! 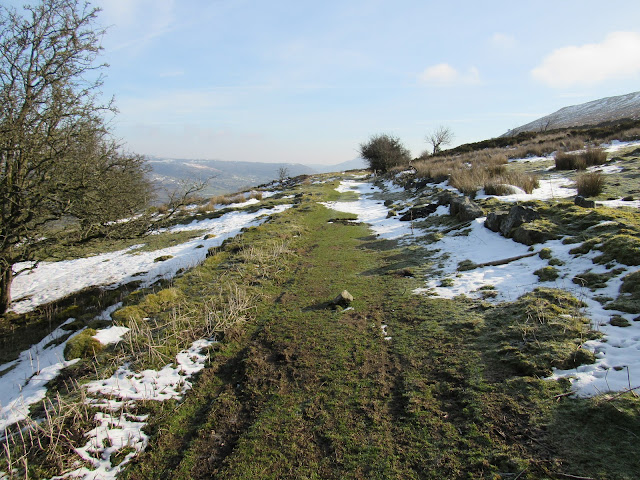 I wasn't alone. And I don't feel bad about eating one last Sunday. My ancestors did -- Circle of Life and all. 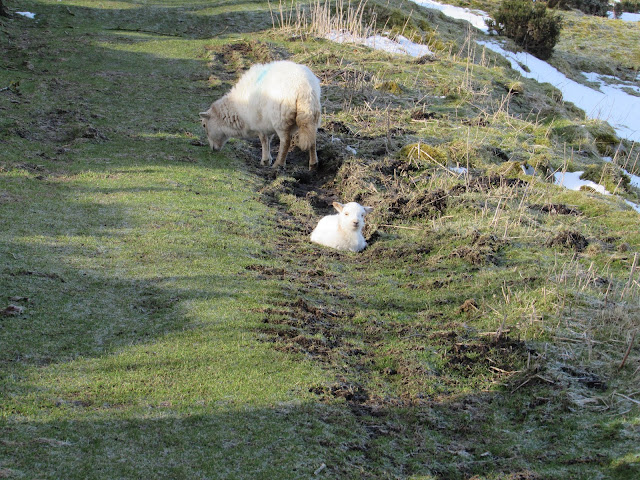 I noticed some interesting lines of stones with holes in them. Later that day, having gone to the Forge Site at Blaenavon which I found closed, I returned to the World Heritage Centre at the town library. There I found this picture and a match for the stones and holes.


The most exciting find was a tunnel (!) on the tramroad. 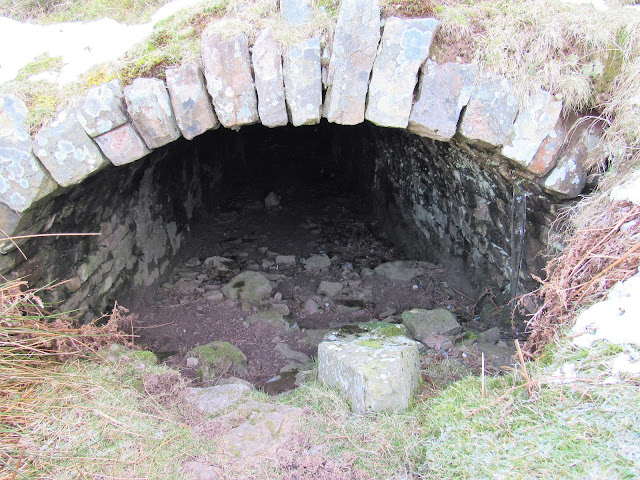 And inside, not stalactites, but icicles! 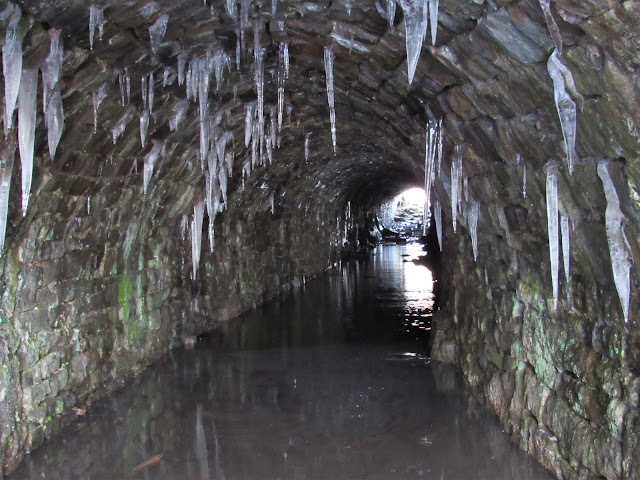 The views were stupendous! (as usual)

After my chilly walk down the tramroad and back with a few minutes visiting the Garndyrrys Forge site on the other side of the Blaenavon to Govilon Road, I went into Blaenavon again as explained. Then I went over the hill to Ebbw Vale to check out a few more things in the archives.

The ancient parish of Llanwenarth stretched across the Usk all the way to Blaenavon. In the mid-19th Century, it was split into Llanwenarth Ultra and Llanwenarth Citra. The Ultra parish included Garnddyrys on the side of the Blorenge. I checked the monument inscriptions for all likely, surrounding parishes and existing non-conformist burial grounds. No sign of Esther (Hester) Morgan Watkins Jenkins (1785-1861). Several burial grounds have disappeared. There was not one at Garnddyrys. At least there was no "company" church or chapel. But we now have photos of the ruins where she once lived. There are historical drawings and recreations as well.

Tredegar Town was next. John and Jane Vaughan Lewis lived on Church Street by 1851 and were members of the LDS Branch there before they left for America in 1856. John was an ironstone miner. I learned in the Heritage Centre that ironstone was mined from the surface first by sluicing through dams of water. Iron, not quite as heavy as gold, but heavier than other materials, would sink and be collected. The iron nodules were much larger than gold flakes or even nuggets so the sluice systems were larger than the wooden contraptions used for sluicing gold. When surface sources were exhausted, then the ironstone miners would go underground in pits (what we call "mines.")


In the 1840s - 50s, the housing row was on the west side of Church Street. The Sirhowy was still a bit of a wild river and it flooded St. George's Churchyard early in the 19th Century sending coffins and worse floating downstream. (More on that a bit later.) The river is now deeply channeled. On the other side of the river was the Sirhowy Iron Works of the Tredegar Iron and Coal Company. The ironstone pits were just above on the mountainsides.


It was here on the same street where the Lewises lived that Aneurin Beavin, MP and Helth Minister, was inspired by a local Tredegar clinic to establish the National Health. This system has been adopted by most of the civilized world to great benefit, especially to the poor. The rich can still pay for their fancy doctors as they subsidize others through taxes as they have benefitted more and disproportionately from the infrastructure and labor of the working classes. More countries should adopt National Health, IMO. 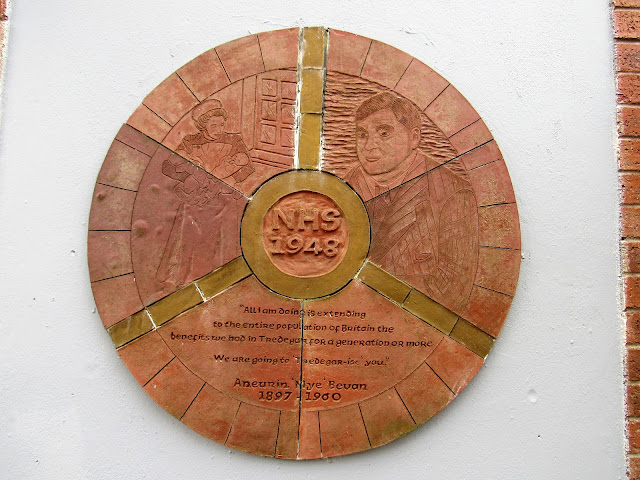 Tredegar is also very proud of its town clock tower. 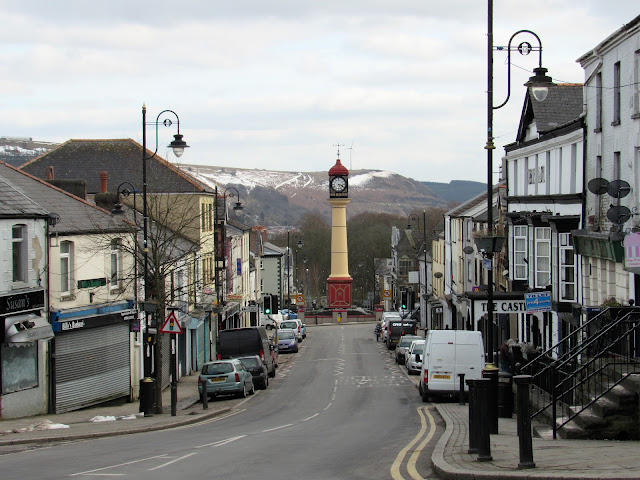 Up above Tredegar, is one of the bleakest and most depressing places on earth (outside of the plains of Southern Wyoming), the Cholera Cemetery of Cefn Golau. Partly because the St. George churchyard burials had been swept away, but mostly because people at the time believed that cholera was spread by dead bodies of victims without realizing it was the excrement of the living tainting the water supply (talk about socialized health!), the burials of cholera victims of the 1832/33, 1849/50, and 1855 outbreaks had to be out of town and out of sight. It is also interesting that the place name existed before the cholera cemetery and it roughly means "the back lights." 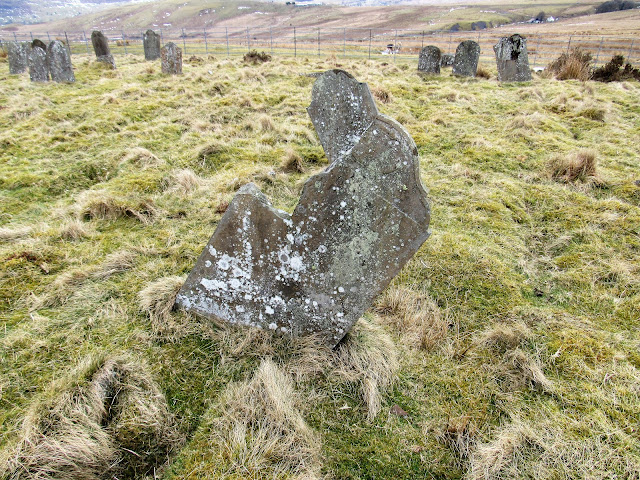 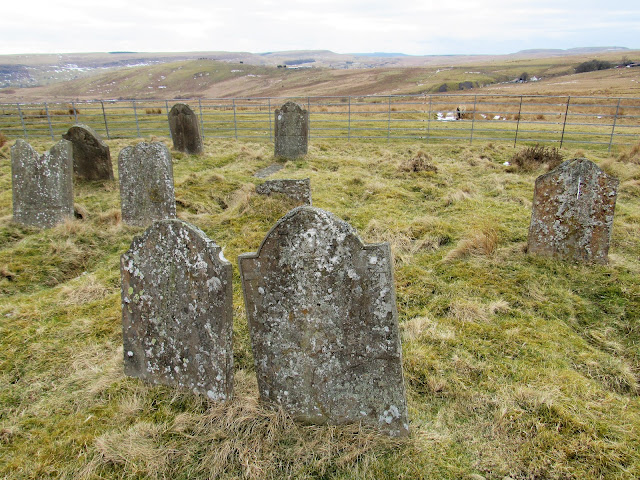 One night and day I bore great pain,
To try for cure was all in vain,
But God knew what to me was best,
Did ease my pain and give me rest
(from one of the inscriptions at Cefn Golau Cholera Cemetery)

We don't know where little Catherine Elinor Lewis is buried who died on 17 December 1850, one day old.