Friday was the day I left the lonely bunkhouse for the last time. It had been interesting and most convenient to be the only one there the last couple of days. I headed deeper into the homelands of ancient Brycheiniog and moved into my new place high up in the garret of the Castle Inn, Talgarth.

First, I had to go to Hay to do some laundry as the coin-op is our second home-away-from-home (the first being the Waitrose in Llanfoist.) And even before that, I'm cruising up the mountains and realize it was almost 10 a.m. and I was almost at Tretower when it was to open. I couldn't help but stop. As I have posted before on our ancient home (here and here), I will only post pics that also have daffodils in them. 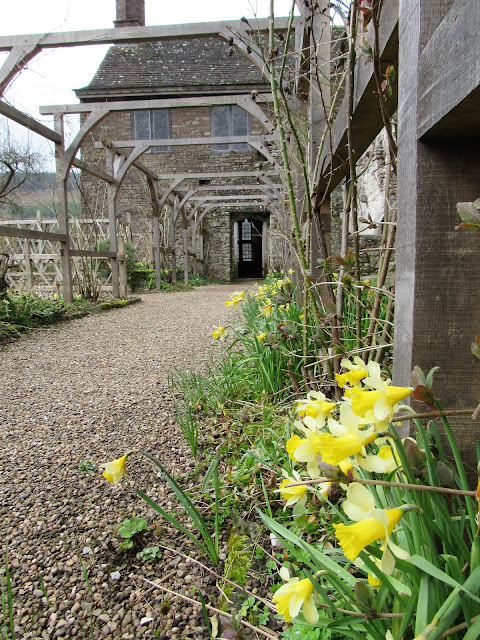 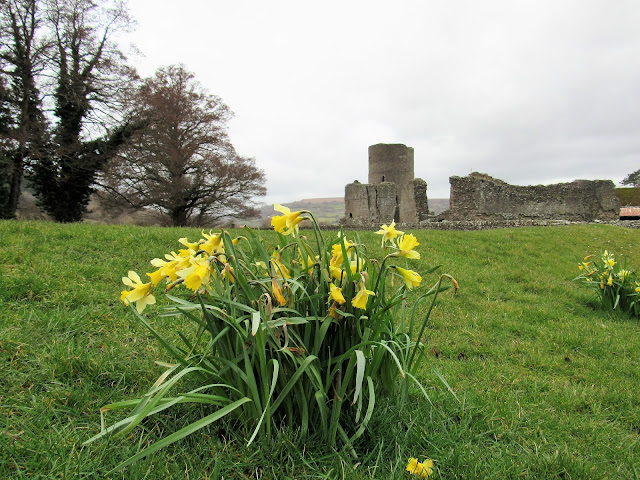 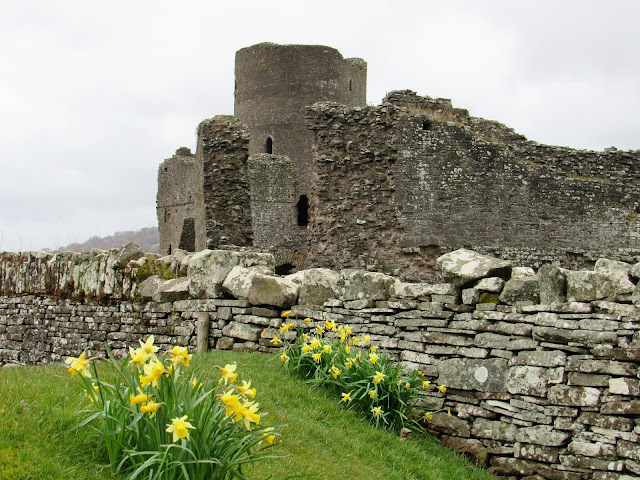 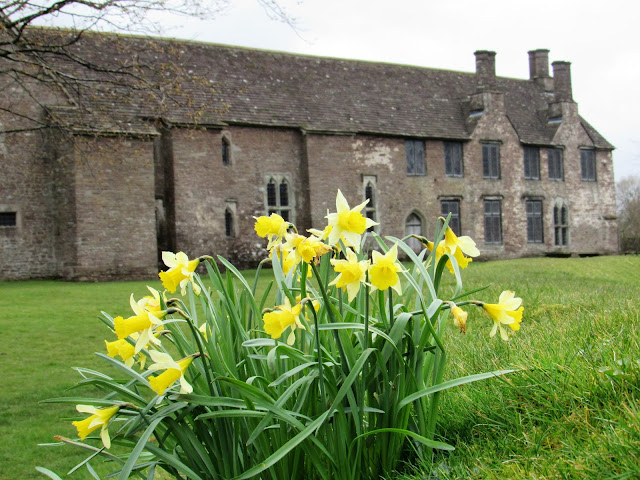 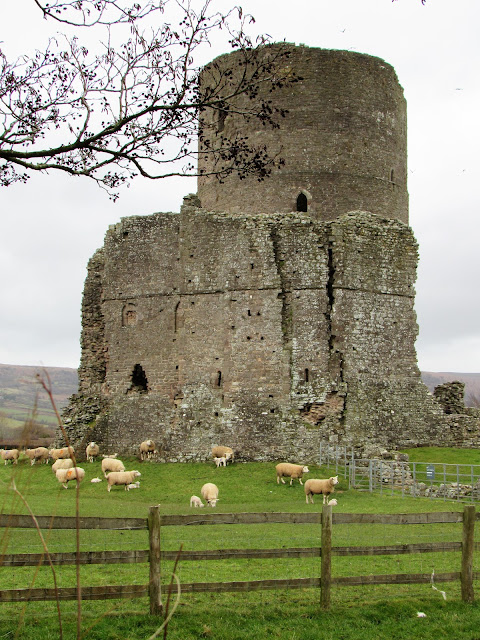 OK. So I make an exception for sheep. That looks like one of those Victorian pastoral scenes you would hang up over your fireplace.

I had a really good talk with the Cadw (Welsh Heritage) expert at Tretower who explained that sometimes the same armorial could be used by different sons or descendants in the family by certain tweak like the number of points on the crown of a crest and whether pointing up and down. Heraldry is a convoluted subject. We covered many other issues of interest to those who love the history of the Vaughans. He confirmed my theory that Rhosier Fychan ap Rhosier Hen probably did not die on the field of Agincourt, the family latched him on to the glory of father-in-law, Davey Gam (Dafydd Gam ap Llewelyn). Roger probably contracted dysentery at the siege of Harfleur and died on a trasport ship voyage back across the channel. Still, the legends and the wall hangings are Tretower are still nice.

My next experience with daffodils was slowing slightly for Aberllynfi (Three Cocks) and pulling off at St. Peter's in Glasbury for this: 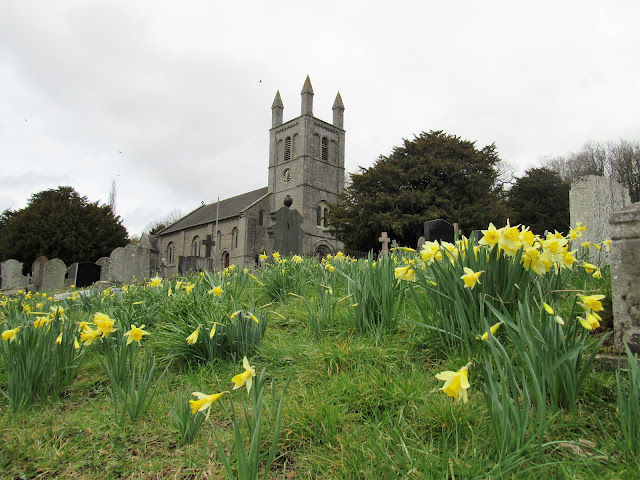 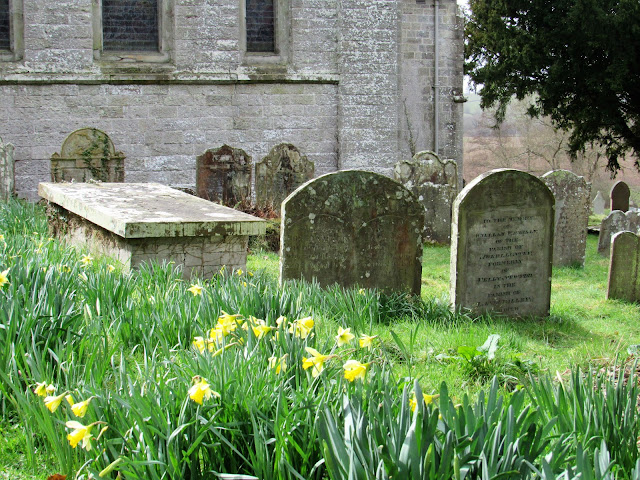 It only took about a half hour to arrange the right coinage in Hay for laundry, car park, and the loo. Finally settling back to wait at the laundromat, I am startled by the notices in the window. My name is on the marquee!

I stared at it with mouth agape then realized a woman was sitting on the bench on the other side of the poster. I went in an apologized if I had startled her. I explained that I was on the notice and she said that she was thinking about going to that. She may have been startled 3/4 to death because I don't recall seeing here there that evening.

There were a couple more notices I spotted in Hay as I walked around. I love this town!

And daffodils at Hay Castle! 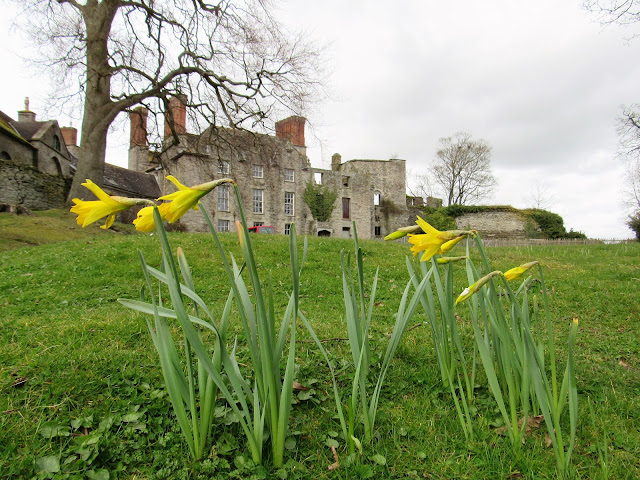 The presentation went well that night. I really enjoyed it. The Hay History Group seemed to as well. There were only a dozen or so well, but they were the right contacts to make to be doing history in Hay! They offered assistance and additional contacts.

I think I will save that experience for blogging later, or not. It was one of the many great days of my life!