My first true twitterpation was with a dear girl a year older than me. That made her within the Mormon cultural expectation of no-dating-before-16, but I, alas, was only fifteen. Of course she was Lutheran so the whole thing didn't matter from her perspective.

She wore a red velvet cape in cooler weather. She was into Mary Stewart's Hollow Hills and Egyptian mummies, especially how they took the brains out with a hook through the nose. She loved the word "goodly." What was there not to like? And she was a big fan of Andrew Lloyd Webber's and Tim Rice's Jesus Christ Superstar (1970). 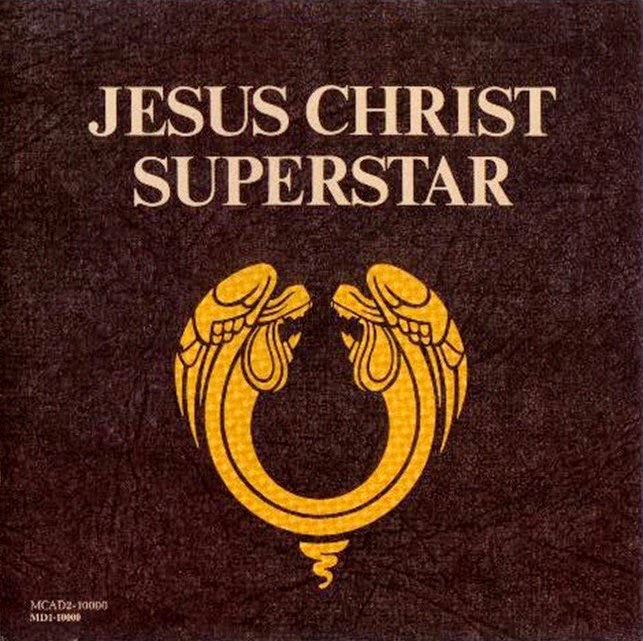 Well aware that many consider the Rock Opera heretical and spiritually offense, I have no problem if you skip this posting. I worried about it back then. There was guidance from my church that it was irreverent and offensive. A girl in my ward, also a year or two older than I, once gave a talk about how she stood for her religious principles and refused to sing "Hosanna" from Superstar with the school choir. I had seen her down at Juanita Beach attempting a tan on her back with the top of her two-piece untied, so I didn't give much heed to what she said (Yes, I was very judgmental in those days for which I repent).

The music of Superstar hit my internal chords melodically as well. Remember, I was a big fan of the Rock Opera genre from The Who. I can also justify myself because Andrew Lloyd Webber continues to be a big fave among Mormon audiences, particularly with his extremely romantic and murderous psychopath, The Phantom of the Opera. And even Donny Osmond appeared on video after a showing of Joseph and the Amazing Technicolor Dreamcoat to laud a new production of Superstar. So I'm pretty sure it's OK to be cool.

It didn't assuage my guilt back then as I bought a cheap 8-track of Superstar highlights that I hid from my parents and only played when they were not home. In later years, I had a few excerpts on my iPod playlists as there were times when I played "Everything's Alright" over and over when I wasn't quite sure that it was.

And Superstar is cool music! Andrew Lloyd Webber's best. I gave in recently and bought a digital copy of the original studio concept album and confirmed my teenage remembrance that it was the absolute best performance. The singers seem so earnest, genuine, and musical. That was the concept. Besides the very interesting 1970 perspective of portraying the Passion of Christ as perceived by real people in ancient Judea without mystical or spiritual interventions. Of course that's what makes it offensive to some as it leaves out the spiritual themes and context of the Gospels Still, there is merit in considering a different perspective from the usual King James Version. And it is always a fascinating question to think how I would have reacted in those days. I recognize too many of my human frailties in the characters of Superstar.

What is the buzz? Tell me what's happening! What if there were a religious threat to what little power and authority I have? Is it just to kill a man so that a whole nation should live? (shades of Nephi and Laban not to mention all the religious ironies of Christ's ultimate sacrifice). And more: How do I love Deity or its representatives here on earth? What is my position in the Kingdom? (The Disciples are no less clueless in Superstar than in the KJV.) How to respond to ridicule and outright deceit and betrayal? And how can I be saved from the eternal grave? (Sorry, slipping back to The Who, there).

The ultimate question: How can I be saved? And is it Christ's sacrifice that provides the Key?

Our group of friends back in 1972 would be properly classified as seekers at least in a teenage, flighty sense. We came from various religious traditions and had discussions about those differences. My girlfriend and I traded off attending Lutheran services and my local ward. Sitting in a pew in either church gave a good chance for twitterpated hand-holding. And the trumpets in the Easter Service with the Lutherans are still with me. Her dad really liked me. We also visited other friends' Pentecostal Church which seemed the oddest with the bare room and older ladies moaning while kneeling at folding chairs.

Recently I read a web article about how there is absolutely zero reliable evidence contemporaneous with Jesus Christ to establish that he even existed. The most solid thing they have is Paul who claimed to know His brother and experience Him in vision as no physical or historical evidence of the gospels themselves can be positively be established until decades, even centuries after Christ.

So, here we are back to that Faith thing again.

It's also interesting that we have so much contemporaneous evidence that Joseph Smith existed. But, of course, that's not the real question. We have dozens to hundreds of pages even in his own hand and the hands of scribes to whom he dictated journals, correspondence, and what we believers claim to be scripture by the gift and power of God whatever physical or mental instruments were used. We do not have the golden plates as the claim is the Angel took them back along with the Urim and Thummim. The seer stones might still be kicking around somewhere in the First Presidency's vault, but what would they prove in and of themselves? (I still keep my eyes out for my own when I'm near a creek bed or pile of rocks.)

No, I still maintain the only way to exercise Faith is to do just that; Believe and Act. It doesn't always confirm itself with a good feeling, yet the most powerful feelings I have had in my life, far beyond the twitterpation of youth or the casual experimentation in other churches, have all had a spiritual component linking me to my Faith tradition. That goes for the negative ones as well. And they're mostly on the good side.

In Superstar, Jesus does tell the Disciples in response to their pleas for confirmation of salvation that they don't understand anything and should look within. That is where I find the Christ working in my very being as I work to exercise my Faith in Him. I think that is salvation. If it isn't, nothing else matters.