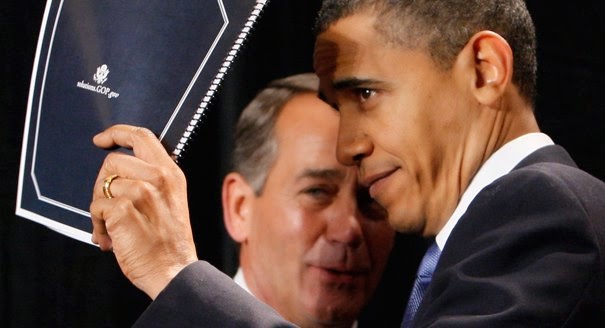 The President and John Boehner accomplished a sort of Holiday Miracle by not shutting down the government. The managed to get a year-long spending bill approved in the House. Called the "Cromnibus" as in "CR" for Continuing Resolution, and "Omnibus" for a bill of multiple agency appropriations, the Republicans put enough "crappy" stuff in to make that the "CR" part.


Yeah, Democrats and Independent Liberals weren't too happy with it. Here's the crappy part:
The funny part is that Boehner had to derail the extreme anti-Obama, anti-government wing of his own party. They wanted to prevent the President from his Executive Order stopping deportation of undocumented immigrants who had families here and no criminal record. The most crazy of the crazies in Congress wanted to stop the President now. Boehner couldn't make them happy, hence the delay until the new Congress convenes with a Republican majority in the Senate as well.

But I have two questions about this. First, since immigration now comes under Homeland Security and its appropriations, are they really going to play with continued funding to that Agency? And second, How are they supposed to cut appropriations to stop the President from not doing something?

Congress can exercise its power of the purse to refuse to fund executive activity and stop it. They do that now and then when they are smart and have the votes. But now there are in the interesting situation of trying to stop the President from not deporting. I guess they can refuse to fund any temporary worker authorization. But they more they fight this, the more they look like they are trying to break up families of our Hispanic friends. I'm not sure how they're going to win any popularity or votes for that except with their hard-core, anti-immigrant base.

In a few months, the Republican Congress, not the President, will own all the challenges of immigration. They can't possibility reap other than the whirlwind as they continue sowing their wild No-nothing seeds.

Remember, the President also got the most liberal Democrats hopping mad with the list of stinky stuff above. That would be Nancy Pelosi, Elizabeth Warren, and many others. So, maybe the President is not such an extremist Liberal after all. Someday, America will get this.

The President won because he got a long-term, bi-partisan spending bill that makes both the extreme left and extreme right very unhappy. There is even a place where the two extremes agree - the provision granting nearly unlimited cash donations to political candidates. Maybe we can work on getting that fixed together.

I know, the right-wing tilt of this situation makes the middle-ground compromise not such a good place, but we're never going to get our democratic republican functioning well again unless we can break through the harsh and hateful division between the parties and between the red and blue states. Boehner and the President are off to a good start.

Compromise. The basis of our Constitutional government.
at 9:08 PM