Party Platforms: "But our 'God' Goes up to Eleven!"

Facebook is already lighting up with all the indignant Republicans disgusted with the Dems for taking "God" out of their platform then putting the word back in amid "boos" from the delegates. It will likely be a political ad by tonight if it isn't already. (And I don't think they were booing 'God' as much as the process and the stupidity of the whole thing.)

I'm not going to defend stupid Dems. I'm just going to say that it's bad enough to pray on street corners to be seen of men. Over the edge is when you criticize others for not praying enough on the street corner. It's as if the conservative critics are jamming with Blue Oyster Cult, "We need more 'God!' Er, cowbell!" Sounding brass, tinkling cymbals.

I know, many will think I'm the sacrilegious one. Well, judge me if you must. I just think playing political football with Diety is worse and more spiritually offense than making Israel and Jerusalem a political prop.

Here's a chart for what it's worth from Media Matters, which I'm sure many may think is as Godless as the Democratic Party: 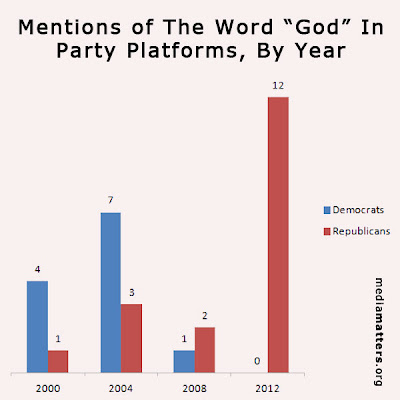 So apparently in 2008, Democrats were only half as Godless, even if in 2004 they had more than twice as much and four times as much in 2000! Of course this year the Republicans went over the top, past eleven! -all the way to twelve!

In an effort to tone down from my own indignation, here's a milder and more elevated thought from our greatest President:


“Both read the same Bible and pray to the same God, and each invokes His aid against the other. It may seem strange that any men should dare to ask a just God's assistance in wringing their bread from the sweat of other men's faces, but let us judge not, that we be not judged. The prayers of both could not be answered. That of neither has been answered fully. The Almighty has His own purposes.”

Abraham Lincoln, of course. Second Inaugural. Thanks for the reminder, Anonymous/D.
at 5:11 PM