It's Even More Personal

Related to my last post, I learned on Facebook that one of my friends (who happens to be one of my few blog followers) went outside this morning and found that his truck had been defaced because of his politics. 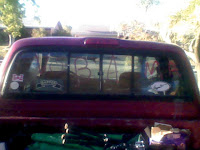 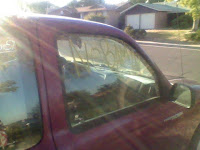 This isn't good. Some might consider this a harmless prank. I've already explained that I don't like pranks. (I'll admit I've enjoyed a few, but as my college roommates I think will verify, I usually held back and watched as in the infamous sardine incident.) This is more than a prank as it is a clear act of damage to private property based on politics. My friend is very active on Facebook with a lot of pro-Obama and anti-Romney pictures, argument, and humor. You know, the kind of stuff we think is funny when it matches our political views and annoys when it doesn't. It's a form of free speech but without any invasion of property or vandalism

My friend has suspicions but no proof. He is pretty sure it was not his next-door neighbors, formerly very good friends with whom he had a falling out - over politics.

My friend is one of my heroes as he is one of the few people I know who came over from a different political perspective. As I understand it, it was mostly about the Iraq War.

He is a military veteran. I remember him at church as gung-ho and supportive of President Bush when the Iraq War broke out. I was quietly troubled as I was opposed to the war long before it began. But he was only one of many I found at church gung-ho for that war. As time went on, he had significant concerns about the war and underwent a serious evaluation of his political beliefs resulting in a powerful switch from being a long-time Republican to an opponent of President Bush and a supporter of Senator Obama. I gotta admire that!

The saddest part of his story is not the recent vandalism, but the falling out he had with his neighbors. He lives in a city with a fairly small LDS population. It is pretty rare to have Mormon neighbors right next door. He does. They aren't just neighbors or members of the same LDS Ward (congregation), they were very close to the point that when they called each other "brother" it was more familial than religious custom at church. When the neighbors found out about my friend's political switch, they were shocked and stunned and considered him an apostate and anti-Christ. They stopped speaking to him. Such "shunning" is very rare in Mormonism and has no basis in doctrine. It was clearly more of a political offense than anything else.

I can't fix that problem any more than I can help clean up my friend's truck in a far away place. But I can do this. I can continue to express my views, many of which my friend now supports, and with respect for the views of others of differing opinions. I know there are abuses on all sides of political disputes. All I can do is try to prevent or lessen any from me and call on others to do the same.

Maybe I'll coin a new phrase in honor of my friend: Political Repentance. A little humility and occasional change of course would do us all some good.
at 7:07 PM