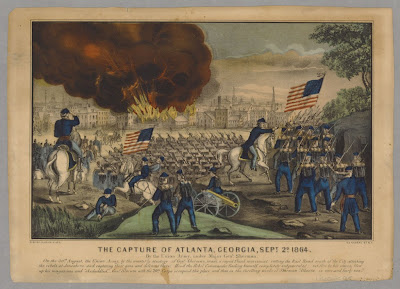 You know it's not just me who compares President Obama to President Lincoln. The President links himself to Lincoln as he did last Thursday night in Charlotte. Remember that Lincoln, arguably our greatest President, was also our most detested - a good part of the country tried to leave at his election - and he was eventually martyred by a States Rights lunatic. He was a compromise candidate of his own party with many believing he would be a political lightweight that they could easily manipulate. He proved them all wrong and while far from perfect, he laid the foundation for a more expansive meaning to government of, by, and for the People - Freedom for the Slaves and Hope for the Common Man (even if it didn't always work out that well in the reality of history).

My title above reveals my latest brain flash on this theme. In the Summer of 1864, the Civil War had been dragging on for three long years. It was going so badly that Lincoln wrote a note dated August 23, 1864 that he kept in a desk drawer:


“This morning, as for some days past, it seems exceedingly probable that this Administration will not be re-elected. Then it will be my duty to co-operate with the President elect, as to save the Union between the election and the inauguration; as he will have secured his election on such ground that he can not possibly save it afterwards.”

Less than two weeks later in early September, the headlines screamed CLINTON er, SHERMAN TAKES ATLANTA! One could argue that was the point in which the re-election of Lincoln was assured and the Constitutional Union was saved.

It is now becoming apparent that former President Clinton's speech last Wednesday night along with the rest of the well-presented Democratic Convention may have changed the dynamic of this election as much as the taking of Atlanta did for Lincoln in 1864.

Thank heavens we are not shooting or literally enslaving each other! But some of the principles of this battle are eerily familiar. Who can doubt that our country is terribly divided and we are questioning whether this nation "can long endure?" Who can doubt that we are in a terrible economic (fortunately not violent) struggle with slow and painful progress almost like a war of attrition? Who can doubt that our President is severely hated and accused of destroying rights and freedom as was Lincoln (ironically in his opposition to the "free" and "constitutional" principle of enslaving other human beings - just as President Obama is accused of "communistic socialism" - or worse - for enacting health care reform to promote private insurance).

I choose People over corporations, even if corporations do have some legal rights. I choose revenue enhancement (i.e., taxes from those most able - including some from the middle class) along with cuts and serious, responsible reform of entitlements. I choose a responsible foreign policy that includes collective security and serious diplomacy over bluff and bluster and stupid wars.

Republican cynicism playing to the tea party and the irrational base of conservative sentiment that detests President Obama (for whatever reason) may have done them in. When the Republicans start dealing with Clintonian Math and diplomatic reality, maybe they can put the fires out in Atlanta before the March to the Sea begins. Somehow, I think Sherman will make it to Savannah by Christmas.
at 4:51 PM