Let me make this perfectly clear. I am not impartial.

Finally back from Reno, I started listening on the radio to the Dem Convention as I was driving home from the airport. I heard some of the President's sister and Michelle's brother. I heard Lilly Ledbetter. These are my people.

And just in this opening night I see the brilliance of the President's campaign slogan, "Forward." It's the answer to "I want my country back."  Forward, not back. I like that.

Keep checking in as I'm on to live-blogging. And Michelle is coming up.

This is a positive convention about the President's accomplishments and the continued struggle for equal opportunity. Sure, there's a bit of Republican bashing, and bashing of Cayman Island investments and Swiss bank accounts. But last week was all about how bad the President was and how he has destroyed the country. I look around and see that we're still here, and improving, slowly but surely.

Video intro to First Lady Michelle. Of the President, Governor Romney, the VP candidates, and all the spouses, I think Michelle has the highest favorability ratings. She's now (on video) explaining her simple family background. Her dad had MS and woke up singing and went to work (they don't have to mention Refalca). She helps Vets and families. She encourages exercise and good health (Limbaugh's fitness dictator). And she's a mom. And a good wife.

And formal introduction from Elaine Brye - a non-political military mom.

First Lady Michelle. "Signed, Sealed, and Delivered" playing. I'm no fashion consultant, but there's something  wrong with her hair. The dress is nice and summery.

She's seen heroes all around the country who inspire her. Vet shout-out. Wounded warriors who will run marathons. "Every day she's reminded how blessed we are to live in the greatest nation on earth." [exceptionalism, check.] She had her hesitation about going into this President thing because of her girls. She was a soccer mom. Loved her girls and Barack. For their dates, he picked her up in an old rusted car. [This is perhaps a slam on Romney's cars from his dad (who ran a car company after all)]. Barack had a coffee table he found in a dumpster. Both had families that had unconditional love. Her dad worked hard rarely missed work. Her parents worked hard to give her and her brother - student loans and grants but her dad paid a "tiny bit" even taking out loans when necessary. His check was never late. For him, that's what it meant to be a man. That was the measure of his success in life. She saw that in Barack raised by a single mom and grandparents who worked hard. His grandma hit a glass ceiling. Their families weren't asking for much. They just wanted their chance. "How hard you work matters more than how much you make." "Truth matters." "Success doesn't count unless you earn it fair and square." Taught to value everyone's contribution. "That's who we are." Didn't want that to change if Barack became President.

"Being President doesn't change who you are, it reveals who you are." She's seen him close up making the most difficult decisions. Values and visions and life experience is all you have to guide you. In rebuilding economy, Barack is thinking about his and her family. Lilly Ledbetter. Tax cuts. Auto industry back on its feet. Brought economy back from collapse and increasing jobs. Refused to listen to those who said to put off health care. He cared that it was the right thing to do. He did it because he believes that we should be able to afford medicine, kids should be able to see a doctor, and no one should go broke because of health challenges. And women have a choice about their own decisions about their own health.

Student loan bill higher than their mortgage when first married. In the end, these issues are personal. He knows the American Dream because he's lived it. He wants everyone to have the same opportunities - even about whom we love. "When you walk through the door of opportunity you do not slam it shut on those behind you." Barack is still the same man she fell in love with all those years ago. He's still the same man who turned down high paying jobs to work in communities. It's "not about how much money you make, it's about the differences you make in people's lives." Same man who would check their girls cribs every few minutes to make sure they were still breathing. He's still a family man -even as he hunches at his desk, pouring over letters. [Was there a protester or someone shouting out to Michelle?] "Four more years!" the crowd chants. Struggles, hopes and dreams are what drive Barack Obama. She loves him more today than four years ago, more than 23 years ago than when they first met. There is no such thing as us or them - he knows that we ALL love our country. Looking for the very best in everyone he meets. Even in the toughest moments, he never lets himself get distracted by the chatter and the noise. He reminds that we are playing a long game. Change is hard and slow, but we get there. Just as folks like his grandmother and her dad. Even if they don't make it they can pass on something better to their children.

Today, the challenges seem overwhelming. Let us never forget that doing the impossible is the history of our nation. It is who we are. It is how this country was built. If our parents and grandparents could toil and struggle for us, surely we can keep on sacrificing and building for our own kids and grandkids. And so many sacrifice in the military for our most fundamental rights - we can exercise those rights - get to the polls and make our voiced heard. If farmers and blacksmiths could win independence from an empire, [and along with a lot of other examples] surely, we can give everyone a fair chance at that great American Dream. That is the story of our country. Unwavering hope unyielding struggle. At the end of the day, her most important title is still "Mom in chief." Her daughters are still the center of her world. [and she's getting emotional.]

If we want to give them that sense of limitless possibility if you're willing to work for it then we must work like never before. We must come together and stand together for the man we can trust to move forward.

Barn-burner of a speech. Even David Gergen [Mr. Bi-partisan] said he couldn't think of another speech like that from a First Lady. "Her testimony was very, very moving."

More confession time. In 2008, I volunteered for the Obama campaign. I didn't do much, but made a few phone calls. They had a very easy system on the web to sign up. Then you got a list of names and numbers to call and a simple little script with a "fill-in-the-blank" to say what you liked about him personally to encourage the Democrats on the list to get out and vote for Obama. I did this a few times both during the primaries and the general. As Utah was rather a lost cause, the people I called were in other states. After just the first day of this convention, I think I will do that again. They did what they had to do to close the enthusiasm gap with me.

Also, my wife and I have a policy that we do not donate money to political causes. I also have a collection of political campaign buttons that I have collected. I started in 1980 with Reagan, Carter, and John Anderson [third party - former Republican]. Since then I've bough a few old, collector's pieces from antique stores (my favorite being in Cerrillos, New Mexico). In more recent years, I've gone on ebay and bought buttons back to FDR (both major parties - and some third parties). My wife is fine with my political button collection. It's harder to find the current ones these days as they are not as readily handed out. The stickers are cheaper and easier, I suppose.

But a do a little bit of a sneaky thing. I buy my Democratic buttons from official campaign websites that go to the campaign and count as a political contribution. For the Republicans, I go to a commercial site not affiliated with the campaigns. It's sort of a principle thing for me.

Today, I ordered my Obama 2012 buttons including these:

Besides the fact that I do like Obamacare (our immediate benefit is keeping our college kids on our insurance until age 26 even if our premiums went up just a little), these buttons will be of historical value. Even if Republicans succeed in "repeal and replace" which I seriously doubt, it is of significance that the official presidential campaign now owns "Obamacare." If it continues and improves even with some amendments as I hope and expect, we will have FDR's legacy of Social Security, Johnson's Medicare, and Obama's Obamacare. Thanks, Antis for crediting the president more than even those historical accomplishments of past progressive Presidents.

And here's the recently released photo of the President and his daughters listening to the First Lady: 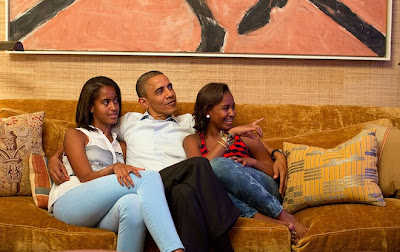 It's really nice to see both the Obamas and the Romneys with good, solid family values.
at 8:23 PM