Racism Is Still the National Curse: Exhibit No. 1, Donald Trump

Please excuse the use of the N----- word. But this is the keystone to the historical problems of our Nation. And it still is.

A meme popped up illustrating the point. (This is where the racial epithet apology applies): 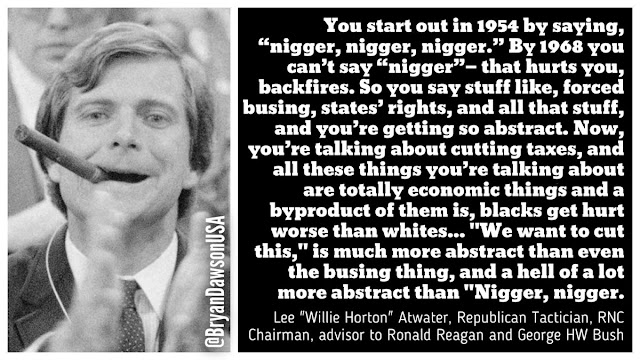 This bare-faced explanation of the Republican political strategy is well-documented in an audio recording of the late Republican Strategist, Lee Atwater. You can find it at The Nation. You can listen to his actual words. It's not pretty.

I've written a bit on racism and made my own confessions and repentance from past racism. It's an ongoing process. One of my Great-Grandfathers was a white man born in Mississippi with a Confederate heritage on his mother's side (his father was oddly born in Denmark). That affected his descendants. Many of us, pretty much all of us, try not to be racists. Some succeed better than others. My own parents made a concerted effort to cultivate friends and associates of African-American ancestry at least in their same professional and political class. And they encouraged these associations with their children.

The problem with the Atwater strategy is that it gives cover to deep-seated racism without the racist even acknowledging what it is.

This is how Donald Trump has been able to get away with the blatant, non-P.C. statements he has made. He tapped into a deep well of resentment and guarded protection of basic racism. It is sort of like letting the flood waters loose. And it's pretty dirty water flowing forth.

The good news is that the Trump phenomenon is a minority of a minority (speaking in political numbers and electoral weight). I don't know if there is a tipping point where things get so bad, violence following provocative rhetoric, that more European-Americans switch to support racist policies and suppression of African-Americans, Hispanic-Americans, and immigrants of all non-white-European background.

And it's a dying demographic. My kids are better than I am. Their kids will be even better in progressing past the racist curse of this country. Sadly, there is still a lot of work for us to do.

Trump has amazing political instincts to play on this with his minority demographic of support. The national disgrace has been that the Republican Party has been playing this racist strategy since the 1960s. Trump is the result of every Republican who has played to that base switching it from the Democratic Party to the Republican Party over the decades of my lifetime. Some are now supposedly horrified to see the results of this strategy and one after another seem to be bailing ship on the GOP and its presumptive nominee. Yet even squeaky clean Mitt Romney, formerly a hero of mine and now a Trump opponent, played to this racist base with all the right code words in his efforts to win the Republican nomination. This was revealed in the infamous 47% recording.

I made the conscious decision over the past decades of my lifetime to switch the other way -- out of Republicanism to a more progressive Democratic Party. I hope we keep going that way.
at 7:34 AM