Not All Who Wander Are Lost

There's a lot you can check out on your own regarding J.R.R. Tolkien's interest in the Welsh Language and Celtic legend. I have always loved his maps. And I was recently struck in reviewing my maps of the South Wales Mountains, home of my ancestors, when I came across what appeared to be a portion of Tolkien's map off the edge of the Shire.


Yeah. At least the names seemed very familiar. Here's Tolkien's map of the Shire from my original paperback copy of The Fellowship of the Ring (1970 Printing): 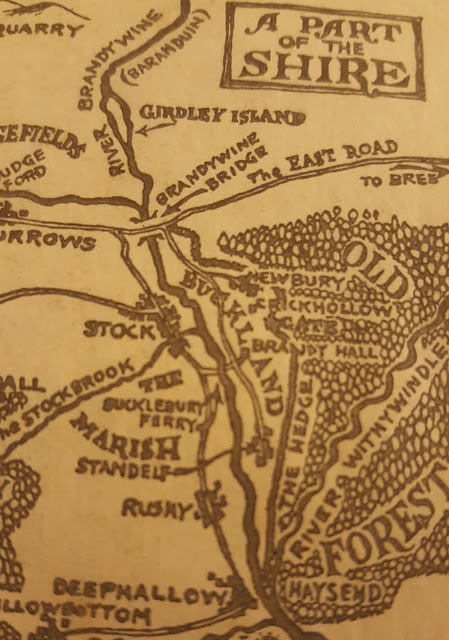 Now, I'm not the first one to figure this out. The actual Buckland Manor explains a few more of the borrowed names:


During the forties, another visitor to the area was busy composing his opus magnum, a work that would make his name famous amongst the love generation of the Sixties and beyond. J R R Tolkien apparently visited Talybont-on-Usk, the village overlooked by Buckland, to write sections of Lord of the Rings. He borrowed generously from the locality to feed the voracious appetite of his book for people and place-names. His friend, Fred from Tredegar, appears as Fredegar and Crickhowell turns up as Crick Hollow. Merthyr with its' industrial background Mordor, perhaps. Buckland, which as the book describes, does 'lie on the east of the river?' became the residence of the strange Buckleberries and was the childhood home of Frodo Baggins. It was the last place within The Shire that Frodo visited before leaving with the ring. (From Buckland Hall website)

They missed one. At the bottom of the map is "Haysend" with some of the Hobbits referring to the border "Hedge" with the Old Forest as "the Hay." Oh, yeah! Hay-on-Wye, formerly known as just "Hay" or "the Hay" is on the border of Wales and England just to the northeast of the real Buckland.

There are other Bucklands in England with the obvious connection to places where deer could be found. But this Buckland, I believe, is yet another transliterated English distortion of the neighboring village of Bwlch. "Bwlch" means "gap" in Welsh as this is one of the entries into the Welsh mountains used by the Romans and other armies or wandering folk.

And just to show you in context, and how wonderful the Ordnance Survey maps of the UK are, compare with the Google version for the locale:

Not nearly as entertaining or as detailed a map. Although this view does show the River Usk along the west side of Buckland as the Brandywine is in the Shire.

Here's a zoomed out view of the OS Map showing the neighborhood.

So, I'm packing my bags for the Misty Mountains. Over the Hills where the Spirits dwell . . . Oooh oooh! Oooh oooh! (OK, I stole that last part from Led Zep. And congrats, Boys, for winning that lawsuit!)
at 7:00 PM