My Old Friend with an Even Older Utah Connection

It was great reconnecting with a friend from when we were Scouts, say, 45 years ago! It was one of those where you can pick up a conversation left some forty years back and keep on going. A few circumstances and views have changed. And we still connect.

He's done some family history over the years. Even back before the internet made things so much easier. A picture of his 2nd-Great-Grandpa has a Utah connection: 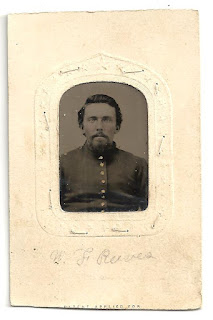 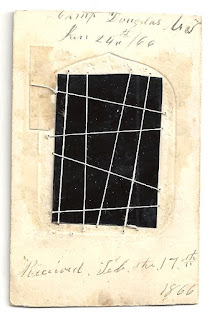 Camp, now Fort Douglas, was established during the Civil War after the U.S. Troops abandoned Camp Floyd, in Utah County, as the Civil War approached. The principal military leader during Camp Douglas's early days was Colonel Patrick Connor of the 3rd California Volunteers sent to Utah to protect the overland trails and established Camp Douglas, uhm, maybe to keep a watch overlooking Brigham Young and the Mormons in the valley below. He is perhaps most famous, or infamous these days, for the Bear River Massacre against the Shoshone near the now Utah/Idaho border. But there was something about Utah than held him here if only as a thorn in Brigham's side to promote non-Mormon settlement and the mining industry. He also established a newspaper at Camp Douglas called the Union Vedette that was full of military, mining, and Mormon news. The latter, usually on the negative side. But it's still cool as an amazing, early historical source on the scene in Utah.

I was able to find articles about the mustering-out of the Michigan Cavalry in which my friend's ancestor served. Imagine being part of the famous Wolverine Cavalry led by none other than Brevet General George Armstrong Custer! And then after the war was over, sent out to fight the Native Americans who had become a bit stirred up during the Civil War years, finding yourself discharged in Great Salt Lake City, of all places. And the Army had even sold your horse!

Here's my friend's summary of the history:


I have a great-great grandfather named Walter Francis Reeves, but he was known as Frank. He served in the Union Army as a private under Custer in the Civil War as one of the fabled "Wolverines" and witnessed Hell on Earth as a participant in some of the worst battles such as Cold Harbor and The Wilderness. My grandmother told me Frank told her that he thought U.S. Grant was a "drunken butcher."

Although Frank saw a lot of action in the Civil War, he didn't get to go home after Lee surrendered. Instead he was sent out West to fight Indians. He was stationed at Fort Douglas and I have a tintype of him there in 1866. It looks you live near where he was stationed so I thought you might be interested in this image (attached). According to family legend Frank continued his civilian life as a scout for Custer and missed out getting killed at Little Bighorn by some fluke, but that story is not supported by any documents.

He added more in a later email:


Frank was born [1838] near Kent, Ohio and raised in Michigan in an area near Lansing. That's how he found himself riding with Custer's group in the Civil War.

The tail end of Frank's war record includes a few Indian battles in what is now Wyoming. He was mustered out of Camp Douglas in 1866.

He returned to Michigan where he lived with his wife, Lydia Melissa (Upham) and three children: Charles Lafayette "Lafe," Jennie Melissa, and Sidney. Jennie was my great grandmother.

Now here's the mysterious part. I can find no record of the Reeves family from 1872-1884. The only tangible clue I have is the old family photo album which contains numerous tintypes revealing some rough looking conditions.

According to family legend, Frank liked the West and signed up with Custer as a civilian scout. And while he was out roaming the land, his family lived in crude pioneer circumstances in Kansas or the Dakotas-- someplace that was flat. One story has it that the Indians felt sorry for this mother and three little kids on their own for long periods of time and left a freshly killed deer at their door.
Frank claimed he was supposed to be at Little Bighorn in 1876, but by some fluke he missed out on the carnage.

By 1885 Frank and family were back in Michigan but Lydia's health was failing. They came to Washington Territory via Canadia rail in early 1889 primarily for her health (typhoid fever) and settled in Centralia, where they already had relatives. She died at age 50 in 1892 (cancer). Frank died Dec. 11, 1916 at the breakfast table of a stroke or heart attack. The house is now a real estate office and Frank's ghost is said to still be hanging around.

My grandmother, Jennie's oldest child, was born in 1891 and shared many memories of Frank, especially about his love of cigars, use of salty language, and being the crusty guy with a soft heart. I think I inherited his love of cigars.

I tried a bit of internet searching myself but did no better than my friend in finding Frank or his family in the "missing years" of the 1870s-80s. And that's a bit odd, because it's the 1890 U.S. Census that is sadly missing, not 1880. by the 1890s my friend's family was safely established in Western Washington State where they flourish to the present.

It does seem likely that the tintype photograph was done by pioneer photographer, Charles Savage, probably at the combination photography/art studio he shared with partner George Ottinger. This building was on South Temple and Main, Southeast corner, an ideal spot for both Mormons and tourists kitty-corner from Temple Square. 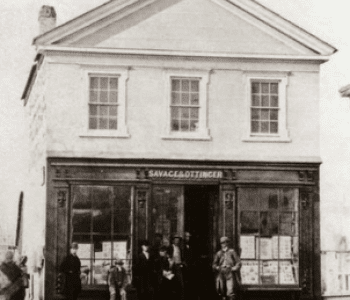 In 1866, Savage traveled to Europe to obtain new, modern photographic equipment that would have replaced his boxy, tintype camera. It fits that the soldier's portrait would be done in January before the trails opened to the East and Frank Reeves was mustered out on March 10. There were regular wagon conveyances for a price between Camp Douglas and the City as advertised in the Union Vedette. I did not come across any advertisements for Savage in the Vedette, but he did advertise in the Deseret News: 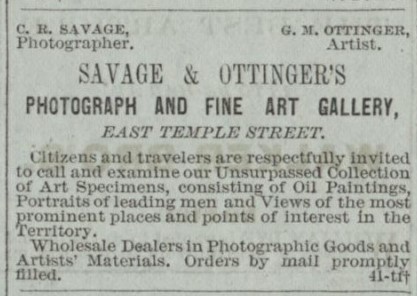 I also did some checking on the Indian Battle of Frank Reeves and the Michigan Cavalry. The regimental histories (1st and 6th Michigan Cavalry) were a little confused at the end of the War. At least one Michigan state official wrote to the War Dept. about the troops winning the war with the Confederacy and then being sent out to fight Indians. It didn't seem fair. And then to be discharged way out among the Mormons without means to return home! Congress did a special appropriation for that purpose eventually.

And the histories weren't clear as to whether the skirmish with Indians was in the Dakotas or Colorado Territory. I believe my friend is correct that it was in "what is now Wyoming" as I added this to the info for Frank Reeves already on FamilySearch.org.

Willow Springs likely Southwest of Platte River Crossing at now Casper, Wyoming. On Oregon/Mormon Trail.
"This was the summer [1865] after Sand Creek and the Cheyenne and their allies, largely Sioux, had for all intents and purposes closed the Overland Trail. Garrisons of volunteers manned the telegraph stations along that route all the way to Salt Lake City. This was also the summer that the battles of Julesburg, Colorado Territory, Platte Bridge, Dakota Territory (later Wyoming Territory) and [the] Red Buttes fight were fought-usually with the Indians as victors. Along with the larger battles were skirmishes and raids by the Indians on the telegraph stations.

"In was in the latter context that the Willow Springs incident occurred. Per John McDermott's Circle of Fire: The Indian War of 1865, p. 105: "While the Powder River Expediton [Connor] played out its drama in the shadows of the Big Horns, raiders continued to make life difficult for those who guarded the Oregon Trail west of Fort Laramie. On August 13, 150 Indians attacked a detachment at Willow Springs, stampeding the stock. The 6th Michigan troops charged them on foot and recovered some of the animals.

"In William E. Unrau's Tending the Talking Wire, p. 189, he has this note about Willow Springs: "Willow Spring was on the Oregon Trail and Willow Creek, roughly halfway between Platte Bridge and Sweetwater Station. Although this well-known camping area probably derived its name from a water spring in that vicinity, Sergeant Isaac B. Pennock of the Eleventh Kansas Cavalry reported on May 26, 1865, 'South of Willow Springs is an oil spring said to run 50 barrels of petroleum per day 5 or 6 miles.'"

This makes sense to me because of the major battle almost three weeks previous on 26 July 1865 at Red Buttes near the Platte River Bridge at what is now Casper, Wyoming. Willow Springs was the next "station" West (Southwest) along the Oregon/Mormon Trail. See, Hack, Steven C., Peace Be to Their Ashes: The 11th Kansas Cavalry and the Battle of Red Buttes, (Army History, PB 20-11-3, No. 80, Washington, D.C., Summer (2011)

The Michigan units appear to have been often reorganized during this period of their service protecting the Overland Trail. That Fall of 1865, Reeves's unit was guarding the trail from Ft. Bridger to Great Salt Lake City and was mustered out at Camp Douglas, GSLC, Utah Territory, in March, 1866.

In a rather round-about way to bring this back somewhere closer to the present, I remember where we parked the bus my friend and I journeyed on from Tacoma to New Mexico and back when we visited Temple Square in 1971. It was by the old Harman's KFC Restaurant on North Temple just west of Temple Square. It's the kind of landmark a Boy Scout doesn't forget. Yeah. That about wraps it up.