A while back I saw this rather provocative posting from Wales on the Merthyr Rising Facebook Page:

February 20 at 5:06am ·
8 years on and we're still paying for the greed, arrogance and incompetence of the bankers.
This should be a really interesting talk on alternatives to the banking system as it it.
Why don't we own the banks and make them work for us, instead of the other way around?

Now, that seems like a solidly Socialistic proposal. Imagine, the People in charge of the banks!

It also goes farther than any breaking-up of the banks and Wall Street power that U.S. Democratic Socialist Bernie Sanders proposes. Pretty radical, some might say.

Then I read Mormon Prophet Joseph Smith's ideas about a National Bank for the U.S. set forth as he became a candidate for the Presidency in 1844: 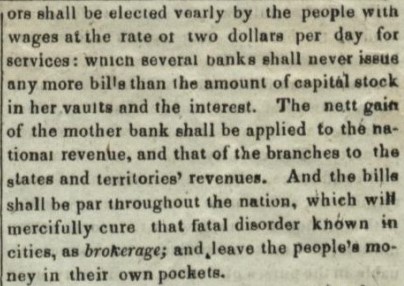 Now I'm not saying that Joseph Smith was a Socialist, or that we should all be Socialists, or that Socialism was even a well-formed economic or political philosophy by 1844 (or ever, for that matter). Nor am I saying that Joseph's political views of 1844 should be ours today. His views on banking were clearly influenced by the difficulties of banks and banking societies established and failing in Ohio and elsewhere in times of economic turmoil. All I'm saying is that the current paradigms of Capitalist Banks and Markets somewhat regulated (generally favorably) by U.S. law, or the philosophical Libertarianism of wide-open, unregulated markets, banks, currency, or gold are not necessarily the way to go.

What I would like to see is a more democratic-republican system of regulations reflecting the will of the people, not the institutions and moneyed-interests being regulated. We need the Supreme Court to overturn or Congress to get us around Citizens United. Corporations are not People, my friends. And Bernie Sanders is on the right track. Hillary, uhmmm, getting there.

"Peoples is Peoples" is even stated in The Muppets Take Manhattan (among my favorite movie lines):