Would You Buy a Used Constitution from this Man?

The challenge was to do a Google-Images search for "Ted Cruz smiling" and see if you could come up with a picture of Ted that didn't look creepy. 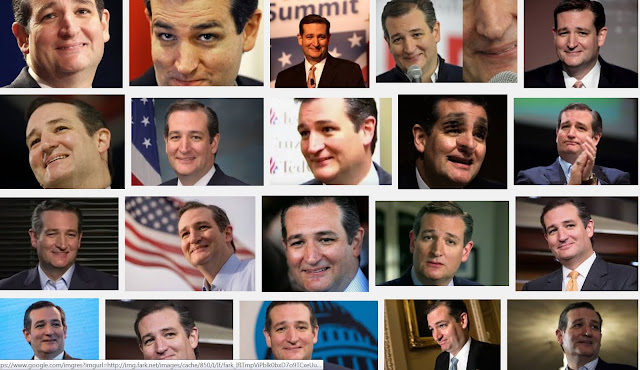 It can't be done. Please note that only one of those pics appears to be doctored. And the creepiest are the official photos (i.e., the ones with the flag). Can you trust a man who creeps you out when he smiles?

Ted only has one friend in the Senate. Yes, our own little Senator, Mikey Lee.

So, my next idea was to see if I could find a picture of Ted with a copy of the Skousenite Constitution like his little friend, Mikey Lee. I did better than that. Ted has his own coloring book version!

I dunno. Maybe it's a Canadian thing to grow up with a U.S. Constitution coloring book dreaming about the Presidency.

The thing that should creep us out the most about Ted Cruz is that he believes that the Constitution was founded on Christian principles and that we should return to being a "Christian Nation."

I'm sorry, but I don't think that will work with my Jewish, Muslim, Buddhist, and non-believing, Patriotic American friends. In fact, I have it on good authority (things I learned in school) that many came to this country for religious freedom and freedom from religion. There were the Pilgrims in Massachusetts, the Quakers in Pennsylvania, the Catholics of Maryland (who established a colony for all Christian beliefs, not just theirs), and the Baptists and other pirates of Rhode Island.

The Founders were well aware of the religious wars of the old world. They tried to prevent that in America by writing a "no religious test" clause into the U.S. Constitution and the First Amendment which protects Freedom of Religion as well as no establishment of a state religion by Congress, be it Christian, or any other form.

Even I admit that our Founders came from a generally Christian culture from the mother country of Great Britain. But a lot of them were Deists believing only in a benign Providence, not necessarily in a Resurrected Jesus Christ.

Ted even has a really strange, pseudo-religious endorsement from media-star, Glenn Beck, who thinks Ted is somehow the fulfillment of a mythical Mormon prophecy to save the Constitution. There are several problems with this insanity, principally that the Church of Jesus Christ of Latter-day Saints has officially denounced such a prophecy. (See here for a fairly good run-down on the alleged prophecy).

I know a lot of people voted for Ted in Utah so a worse alternative didn't win more delegates on his really weird march to the Republican nomination. But Ted as the lesser of two evils is still pretty evil.