Yes, it's a premature headline. And it's based on very amateurish "entrance/exit-polling." But also the fact that I have never seen a crowd at the Democratic Caucuses in Utah like the amazing crowds tonight. And It's all over my Facebook feed! If so many hundreds, no, thousands, are going to the Democratic Caucuses, it must be a big crowd for Bernie Sanders. The few people I saw with Hillary buttons looked a little worried. And I did have a friend from the neighborhood go with me to vote for Bernie. We met my daughter there along with some friends from our precinct.

Faithfully attending Democratic caucuses in Utah for several years, I have never had to wait in line! For some reason they sent our State Representative District to the far north of the district to caucus on the Kaysville/Layton boundary. And we didn't actually caucus with our precinct as it was all we could do to patiently wade through the crowd with the volunteers changing the line formations three times before I got up to have my ID checked and authenticate my presidential preference ballot.

At one point when they started calling for people from "A-C" I politely challenged the lady wearing a Hillary badge that my daughter's name began with "U" and if it's now alphabetical, then she'll be here for two hours and she has a baby at home! The nice lady took my daughter by the hand and led her right up to the table to cast her vote. My daughter drove separately, so we were good. I had all night.

I met a really nice lady whose name began with "V" like mine so we stuck together. I had to ask where she was from originally because of her British accent. She was from County Durham and had relatives in Bishop Aukland, Stockton-on-Tees, and Witton Park! All the places my ancestors lived! So we figured we must be cousins. I joked with her that in Britain I would be a Republican and she said she would be too and I admitted my preference for Plaid Cymru, the Welsh National Party.

They ran out of ballots so they had to run more off a copier and mark them numerically to keep track of who had voted. It was fairly evident that the caucus system was not designed to handle this many voters. Utah is in play at this point in the presidential primaries and with the disarray in the Republican Party, it could be in play for the General Election in November, particularly if Trump is the Republican nominee. (Utahns do not like Trump - some because he has been so mean to Romney and others of us because of the more obvious deficiencies of the candidate.)

I just got a text from my wife who was supposed to go with me but did not get home in time. She's still a registered Republican so I thought she'd be happy to miss the ride or have an excuse just not to caucus anywhere. But she did go over to the dark side again. Her text reads:

Yikes. I just turned to President ___ [counselor in the LDS Stake Presidency] and CJ and gave them an earful about common core misinformation. I don't agree with this party anymore.

I tried to warn her. Actually, she's voted with me a few times, more so more recently than in the past when she made a point of canceling out my vote. And as a school teacher, she doesn't need me to tell her the other party is nuts. The worst of it is the Republican Caucuses are likely to go on late into the evening and get hotter as they go. No, the actual worst is that the caucus system imposed on us by a Republican majority in the State Legislature is for party control to suppress the vote as it is difficult for many to get out within the restricted hours and for some to have the ID required if they don't drive or have the ability or patience to jump through the other hoops. Aargh!

The best joke of our evening was pointed out by my daughter on the ballot: 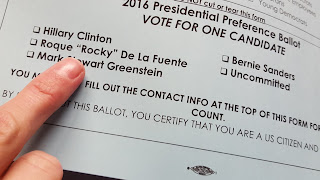 Who the heck is Roque "Rocky" De La Fuente? And doesn't be belong with Trump's World Wide Wrestling entourage? And why does he need to state his first name twice?

My wife got home. She reported that the dark-side party wasn't really as busy as usual.

And my daughter reminded me of the other lady who came up to her with a ballot and asked, "Why are there only Democratic names on this?" My daughter replied, "I think you might be at the wrong caucus." The lady shrugged her shoulders and left.
at 9:25 PM