Back When the Future Was Orange!

Call me old-fashioned, but I really liked the LDS Provo Temple when it had an orange spire.

In 1976 from my room in the LTM (MTC), the whole Temple seemed to glow orange at night. Yes, some had their architectural-critiquing  fun with the flaming candle in the center of the birthday cake. But it was cool! The reason I liked it was because of the architectural style known as Googie. Yes, Googie. Which is pretty odd especially since I only just discovered the term "Googling" around for "Orange Provo Temple" and, of course, "Space Needle." Googie style came out of (where else?) a drive-in restaurant in Southern California.


My family moved to the Seattle suburbs in 1961 as the Space Needle was in construction for the World's Fair of 1962. Officially the Century 21 Exposition, it put Seattle on the map - or at least the Space Needle on postcards. I have very slim memories of the actual fair. But the fair planners planned to use the fair facilities to make up the post-fair community place known as the Seattle Center. When I was a teen, you could go up the Space Needle for a dollar! Yep, that was a good trip for a buck! Now it's an astronomical $21.00!

Whether Googie came first or the "Jetsons," they clearly cross-pollinated each other.

And that was my youth, boldly looking up towards an out-of-this-world (and brightly orange) future!

But back to the Seattle World's Fair. There wasn't a significant Mormon presence. Sure, the Tabernacle Choir passed through one weekend - August 15 & 16 to be exact.(I still have my Official Guide Book.) And we went to the Fair several times with out-of-town guests, many from Utah. But it was at Seattle that the inspiration came for the popular Mormon Pavilion at the 1964 New York World's Fair. 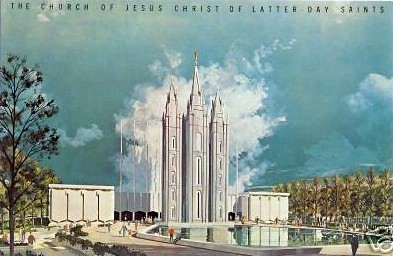 
After solidifying a distinct space in the [New York] fair, the Church then developed a unique theme. Although “Peace through Understanding” was the fair’s official theme, David Evans [Brother of Richard L. Evans] proposed the theme “Man’s Search for Happiness,” a phrase that had inspired him during his Church-sponsored investigative visit to the 1962 Seattle World’s Fair.

Connecting back to the Temples. The designer of the 1964 Mormon Pavillion was Irvin T. Nelson, a landscape designer for the church. He later, at 80 years of age, worked on the grounds for the beautiful Washington D.C. Temple. The architectural team for that soaring edifice was led by Emil B. Fetzer, our LDS Googie guy.

The DC Temple? Yep. Spires of golden orange pointing to heaven, blazing over the Washington Beltway. In my view, the future still points to Heaven that way.

I found this great vid of the 1962 World's Fair. The girl is a little over-excited and the Bell Telephone domination of the future didn't happen, thanks to Sherman Anti-Trust, but it's entertaining none the less.