The Valhalla of Scouting

"The Valhalla of Scouting," That's what one friend called it under some odd circumstances a few years back. And it seems appropriate this year, the 75th Anniversary of Philmont.

Our friend was the Director of the Albuquerque Youth Symphony in which our son participated. He was an Israeli Citizen and far from any family. The Scout Troop in the neighboring LDS Ward had invited him to go on a river rafting trip. The Musician had injured his shin on a rock and his foot then became infected. The Youth Symphony Member in the other Troop had a dad along who was a doctor. Our Symphony Director was treated well, but ended up in the hospital. When released, the doctor's family was leaving out of town and the Scout's mom called my wife to nurse the injured Musician back to health. He spent nights at his own place, but was propped up on pillows on our couch during the day while my wife fed him cookies.

When the Symphony Director heard that my son and I were going on a Philmont Trek, he said, "Isn't that the Valhalla of Scouting?" The reputation was secure; the description seemed to fit with us.

In celebration of Philmont's 75th, I've thought a lot about my experiences here over the years. The amateur historian in me wants to connect back to my own past - the first time I came with my family to the Training Center in 1966 - and the first time I went on a Trek in 1971.

There are two parts to Philmont. There is the Training Center (PTC) and the Camping Headquarters across the road. Actually, there is maybe a third with the Philmont livestock operation even if most of the grazing lands on the sloping plains remained in the UU-bar Ranch, and there is the historical part with the museum, Rayado, and the Villa Philmonte maintained in pristine condition as it was in the 1930's when Waite Phillips donated the property to the Boy Scouts of America.

Waite Phillips, you ask? Well, he's the reason Philmont is here. Fortunate enough to be set up by older brothers (the ones of Phillips 66) he made a killing from oil in the 1920s and built a summer ranch home in New Mexico along with the purchase of thousands and thousands of acres of prairie and beautiful mountains. Apparently wise enough not to lose all his fortune in the Great Depression, he settled into a quiet life of retirement in Tulsa (Philbrook Mansion), with his summers and vacations ranching, hunting, and fishing out of his Mediterrean-style Villa in New Mexico. Growing tired of that, and I heard once that it was also out of fears for his own children after the Lindbergh Kidnapping, he started donating his lands in New Mexico to the Boy Scouts of America. It was rather altruistic as he had fulfilled his boyhood dreams of becoming a Cowboy, he wanted other boys to have that chance in a rugged setting to create character and good citizenship - the purpose of Scouting. His famous quote was sincere and self-fulfilling prophecy:


"The only things we keep forever are those we give away."

I won't go through all the history of the donations and establishment of various Philmont facilities. Suffice it to say that in the 1950s, a National Training Center for Scout leaders was established right next to the Villa. It was here that I came with my family in 1966.

What I want to do is to share the perspective from my own personal history to discover what I can that is the same from my first visit here in 1966. The pictures above show a few of those.


The next picture is a little odd, but I always get a comfortable deja vu going downstairs to the restroom below the Assembly Hall and Dining Hall No. 1. At least the fixtures are the same. They might even be "Googie" style from the 50s. Just be glad I only took pics of the sinks. 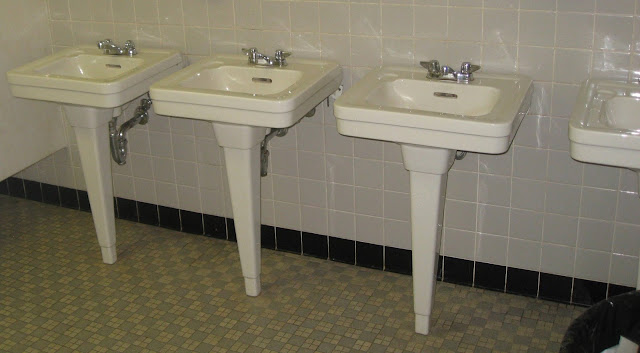 And then there's Program. In 1966, the families of those in classes at the PTC followed a modified Scout activity program. In more recent years, they've gone to activities not necessarily related to Scouting so as not to interfere with the Scouting program back home. Some things, however, remain the same. The Disney movie, "Follow Me Boys," with Fred McMurray and a young Kurt Russel as a juvenile delinquent reformed through Scouting and adoption, came out that year. I'm pretty sure Disney allowed Philmont to show it because I think that's when I saw it for the first time - and then every "movie night" I've been here with my own kids and now grandkid.

And then there's Cowboy night. They have a barbecue out on the greensward and serve buffalo that kept coming back up out of my nine-year-old little stomach outside the canvas in South Tent City. This year, I went with the chicken.

At present, it is late after a full day. I sit on a bench in the greensward. No one else around. The only sound is the fountain behind the villa. The sky is full of stars. There is no way to fully explain the magic of Philmont. I leave you with a few thoughts to contemplate - all absolutely genuine. 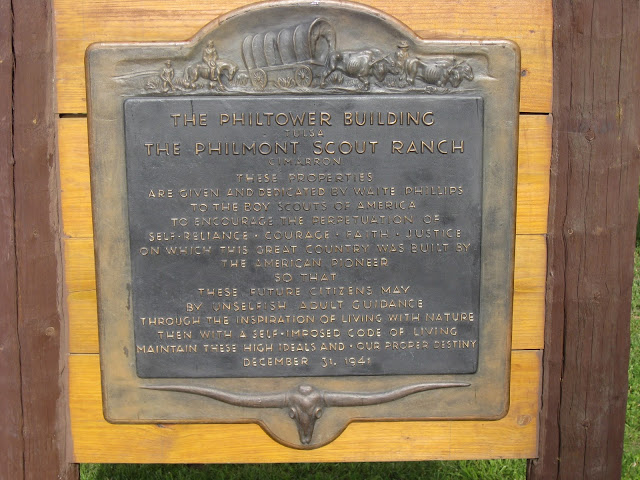 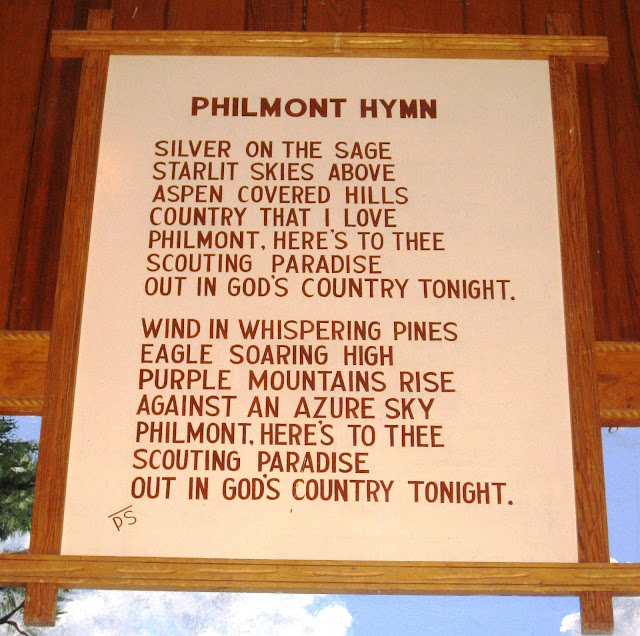