Sunday, we went to the LDS services at Philmont with the nice, little, roofed chapel. A large trek group from Illinois was there along with the few from the Training Center (PTC) and the usual smattering of staff members who were not otherwise assigned Sunday morning.

The meeting is always interesting with heavy emphasis on the Scouts going out or coming in from the backcountry mountain treks. I did that myself as a 14-year-old and again as an adult leader. The most fascinating is to watch the Aaronic Priesthood boys called up out of the miscellaneous attendees and instinctively know what to do to administer the emblems of the Sacrament to the body of the Lord’s Church. And looking over the Scouts above the stand is the blue-tinged window with the flor-de-lis and rather muscular Savior. He did have His mountain treks after all. 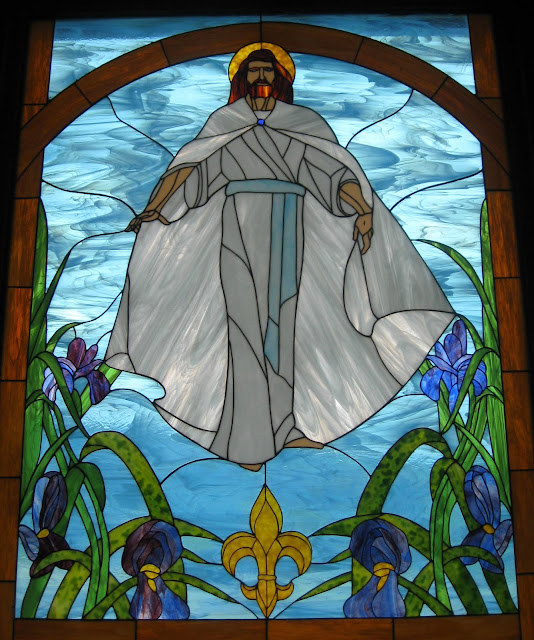 Elder Wilson noted that they were only allowed two hours for services so they have a half hour Sunday School, an hour Sacrament Meeting, and a half hour for Priesthood and Relief Society afterwards. He looked right at our grandson to say he was sorry there was no Primary, but our grandson was quite pleased. He said to his grandma, “You mean church is only an hour! My little brother has to go for THREE hours!)

The message Sunday was more of a Chaplain’s message to the young men on their trek and application to life. Often, Elder Wilson will call up members of the audience to speak or it is a testimony meeting with volunteer participants rising to speak as moved upon by the Spirit. I always have some thoughts in my head to share just in case I get called up. It would be a good gig to be Chaplain at Philmont. But I have yet to be called, much less chosen.

Sunday is still before Program begins at the PTC. The faculty continue their preparations and then greet the arriving participants. I wandered around seeking the elusive hot spot hot enough to upload my blog as I watched my grandson play with instant friends. There are no guarantees in this world of sorrow, but with 99.99% percent confidence, I could tell my grandson that Philmont is a safe place with good people here so it was OK to make friends with any of the kids and even OK to talk to adults. I knew they were all carefully screened and uncommonly friendly.

I made my own friends talking to strangers. Being the introverted type myself not to mention the sometimes odd, if still screened and safe personalities in Scouting, I went ahead and struck up conversations with people. They come from all over the country. I really do need to get a little more charity towards the Southerners, heavily represented in Scouting along with us Mormons thus reflecting the historical tensions between the prophetic Restoration and Evangelical traditions. Bottom line, their speech and pride drive me crazy!

Moving on to the more positive contacts, I did not initiate the first, but as I was returning to our apartment for something, the Protestant Chaplain caught me unawares and we had a nice sit-down chat on our porch as we looked over the little non-denominational A-frame covering the stand where he would soon be conducting services. He is a retired Army Chaplain and went on with his story of the difficulty he had with LDS in Iraq - not among the native population (that day will come), but with the civilian contract workers who, he said, used to be Stake Presidents back in Utah. He could not convince them that he was supposed to supervise the religious ministry among the soldiers. "Those guys did it under their own authority!"

I tried to explain the whole deal about lay ministry as opposed to professional clergy. It is another historical/spiritual tension not likely to be resolved by me. "They didn't even have any training in the Ministry!" he exclaimed. He actually asked me to take the concern back home to Salt Lake to discuss it with the LDS leaders. I didn't have the heart to tell him that my contacts are limited to one Seventy Emeritus who still works the small, family peach orchard next to our house. I did try to explain tactfully why we have a "priesthood of believers" without the need of theological certification.

The other contact was a bit more positive. One of this session's participants is an Episcopal Priest who had the coolest patch insignia with the "Wings of Eagles" springing out of the Episcopalian Shield with a "flor-de-lis" replacing the St. Andrew's stars in the upper left blue field and a bishop's miter on top.

They used the patch for a religious retreat in Texas when they were getting their religious emblem program started.

He also explained to me a portion of early US History I didn't know as to why the Episcopalian Church in America has the St. Andrew's blue field & cross. The first Episcopalian bishop in the US refused to be ordained in England as the bishop's there required an oath to the King of England as head of the Church (since Henry VIII). He crossed the Atlantic twice to be ordained by the bishops in Scotland, once for Priest and the second time for bishop. The bishop's in Scotland were "Non-Jurors," understandingly refusing to swear the same oath to the English King. American Episcopalians (not usually referred to as "Anglicans") just went up a notch in my esteem.

This morning, the Protestant Chaplain found me again and somehow we got into a discussion of how atheistic secularism or naturalism is destroying America (his view). He was promoting religious pluralism. I admitted my support for principles of pluralism but tried, again with the attempt at tact, to explain why non-belief is important to protect and that religious neutrality is not necessarily anti-religion. Atheism is a religion to him if not his choice. I didn't disagree but noted that his ideals of pluralism were great, but they haven't played out too well in historical practice with reference to followers of my religion fleeing or kicked out of New York, Ohio, Missouri, and Illinois. I noted that we weren't the only ones. Religious minorities are often the objects of harsh treatment as much as any other identifiable minority. There would be no Rhode Island if Roger Williams hadn't been kicked out of Massachusetts Colony. (Remember, I'm not a big fan of "states rights" on a religious basis.)

So, I end up in or out with various forms of Protestantism. I need to find the Catholic Chaplain and the Scout Rabbi. Well, there was that one in the stained glass.