My favorite thing about Kit Carson. That was the battle cry of the New Mexican Volunteer Regiment he organized in the Civil War. Let us remember there were Spanish-speaking people in the American Southwest long before there were any African-American or European "Texans." Like 200 years or so. The Tejano guys came by invitation of a new Mexican Republic and then they proceeded to break all the rules, most egregiously, slavery. One of the first things the Republic of Mexico did was free the slaves. The Texans were a bit more difficult to convince. 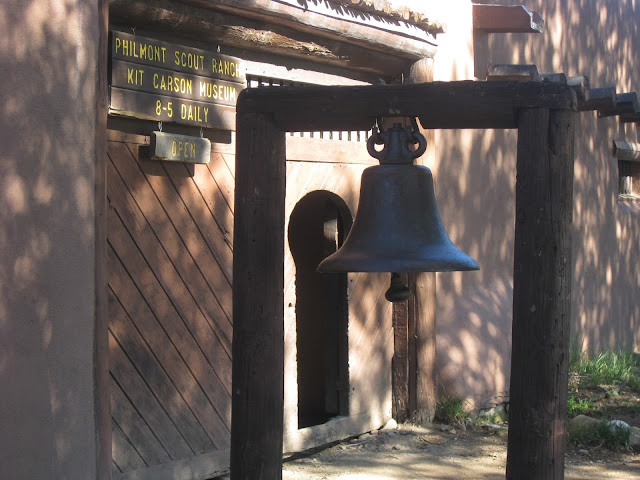 But I digress. What I really want to share is the best living history museum ever! Rayado at Philmont Scout Ranch, New Mexico. Established by Kit Carson and Lucien Maxwell in 1849 as this country came under US control through the war with Mexico (a fortunate mistake as it was prompted itself by the desire to expand Slavery in the South and the fact that Texas became a republic and then a state without a clear southwestern border - they claimed to the Rio Grande through what is now New Mexico and on into Colorado! Oops. digressing.)

Rayado and Kit Carson's fort became an important way station along the Santa Fe Trail. The Scouts obtained a great piece of property (more about the Philmont Story later) along with Rayado, and have turned it into a wonderful historical recreation of the 19th Century Frontier. There are Philmont staff to greet the Scout groups and general public dressed in period clothing demonstrating all the activities of the old place. I'll stop diatribing about Texas and show you my pics from today: