Cross-posted from the NEW Family History Blog at johnelinorvaughan.blogspot.com! That doesn't mean I'm abandoning this one!

In the continuing search to find Elinor's grave (and at least we're on the right continent now), we find one more tantalizing clue in the Springfield City Cemetery, Utah County, Utah: 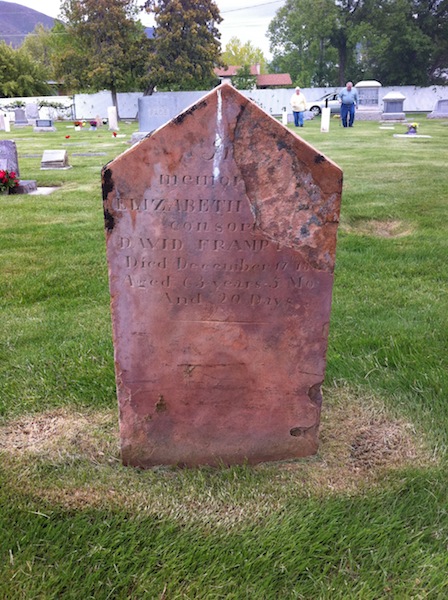 This is the grave marker for another of the plural wives of Charles Hulet in the Springville Cemetery that you can see here. So what is there of interest in this one above?

First, it's obvious that grave monuments don't last well over the ages. That was shockingly evident in the more humid Welsh border country we visited a few years back. Sandstone isn't best stone for the eternities either. This one has significantly deteriorated since 1857. The conclusion I draw from that is that if Elinor is buried here, and if there was a stone marker, it very well could have deteriorated beyond recognition.

Second, 1857 is significant. Charles Hulet was still alive and it's the year he was sealed to Elinor. This death is noted as December 17, 18[ ]. We are taking Family Tree at its word that it was '57 which seems reasonable considering the age and style of this marker. And the significance here is that Hulet likely had this marker placed for this plural wife. I need to go back and check (or someone else can and report in) on the Springville Ward records where I didn't find any reference to Elinor/Eleanor to see if any Elizabeth Frampton or Hulet is there. (Her maiden name was Hough which apparently ended up as "Huff," now apparently missing from the sandstone.)

Third is the fact that while Hulet was likely involved in thes burial, there is no indication of  Hulet's name on it. The missing part of the name could be Hulet, and it could fit. But so could "Hough" or "Huff." Even an "H" wouldn't help clarify that. I don't know what to think about Elizabeth's previously deceased husband Peter Frampton referenced as "consort" except that the dictionary says it could mean "legal spouse" more common in archaic times. Maybe it was some way to designate her as a plural wife? Maybe the civil marriage was considered of less importance than a sealing under the restored priesthood? I dunno. But very interesting is the fact that Family Search does not show a sealing to Charles Hulet.

Another tidbit is that checking the cemetery records, all the wives of Charles Hulet, except the first one that died long before he joined the Church and settled in Springville, are buried in the Springville Cemetery but not all next to him. It probably wasn't the practice in those days to think too far ahead on family plots. And, it may have been unlike the plural marriages entered in the combative years of the 1870s and 80s when defiantly proud patriarchs ended up having all their wives buried side by side. (In our first year of marriage, my wife and I would bike to the Provo Cemetery and stroll among the headstones looking for the polygamist families. Guess we should have gone to Springville.) It may have still been a little secretly discrete in the 1850s. The practice hadn't been announced publicly until 1852.

We are planning to check all available Springville Cemetery records. There's a book at FHL and the Sexton has historical records. There may be a hint somewhere if not likely a name as that already would have turned up when cemetery plots and lists were prepared and are now on-line. We should also check on who put that newer monument on Charles Hulet to see what information they had as to why Eleanor Jenkins Vaughan was included.

And I think I know where they got that name "Eleanor." I went last Friday to see the Special Collections at the LDS FHL. Those are LDS Temple records that require a recommend just to get in the door. You can't copy anything or even type on a computer. Penciled notes are all that are allowed. My graphite scratches reveal that the day Eleanor was sealed to Hulet, he was also sealed to two other wives, one living, and one deceased. The deceased one was Margaret Noah who joined the Church with him in 1831. The other living one, besides Eleanor, was Mary Lawson also a widow from the handcart companies of '56 her husband having died near Devil's Gate (Martin's Cove). She died in 1899 and is buried in Springville. So, I think the person who placed that monument to Hulet got the information on Margaret and Eleanor from Special Collections too.

So where does that leave Elinor ("Eleanor" to Hulet)? Hopefully, in Springville. As Hulet died in 1863, whatever he did or didn't do with regard to Elinor's burial could very well have disappeared with time as she had no descendants here in Utah until 1886. And she could have survived him ending up with only a wooden grave marker and no one to care for it. If she was a somewhat secret wife even if only to be taken care of, it's no wonder that no records other than the Temple records would indicate anything with regards to a sealing to Hulet just like Margaret Hough/Huff. And if there was some burial record with her name attached in any of its variations, it would already be available in the cemetery lists. We'll work on what we can for other little hints in the cemetery records. There are unmarked graves, after all.

And for at least some amount of time, in 1856-57 and beyond(?), she had to exist somewhere in some ward record. Maybe we should try Provo? Any other ideas out there? Spanish Fork?

Anybody want to go to Springville next week with me?
at 8:18 PM