Perhaps my second favorite place at Philmont, after Rayado, is the Seton Museum. I've certainly spent a lot of hours there. It's a great museum of Philmont and Scouting History, along with Southwestern Art, wonderful books, posters, art, and Southwestern Indian jewelry and pots, etc. Seton was one of the founders of Scouting in America.

The great and somewhat eccentric Seton was most renowned as a Naturalist. In those days, conservation was a little bit different than today as he was an avid hunter and dissector. But Michelangelo couldn't have created his masterpieces without cutting up a few cadavers. Getting the other criticism out of the way, Seton's most famous book "Wild Animals I have Known," was trashed by one reviewer who entitled it "Wild Animals Nobody Knows" because Seton anthropomorphized his subjects ascribing human thought and sentiments. But his actual drawings and studies were incomparable - and the stories are highly entertaining.

Seton donated his library to the Boy Scouts. It is full of Nature books, Southwest History, Boy Scout publications - official and otherwise, and Seton's own writings. Here's just one section of that, including editions in Japanese!

The highlight of the Museum for Scouts are the wolf paintings. The kind to keep you up at night . . . .

And finally, for my University of New Mexico friends, the original "Lobo." (And a great story in his book!) 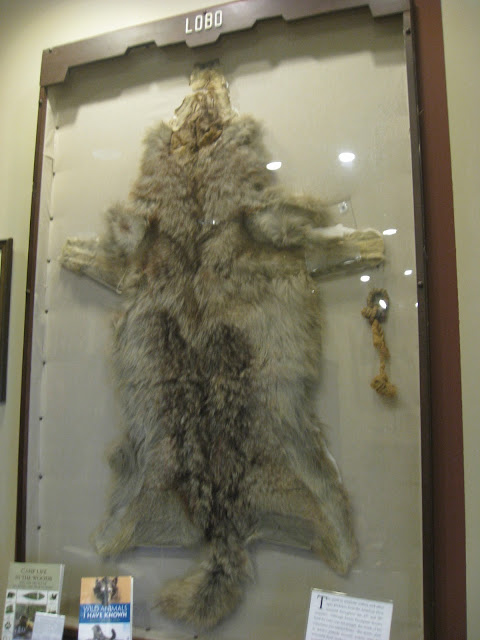 Visiting the museum this morning, and before I took all the foregoing pics, I realized that my camera battery was dead. So I plugged it in and browsed the shelves. I found this gem from his own library. 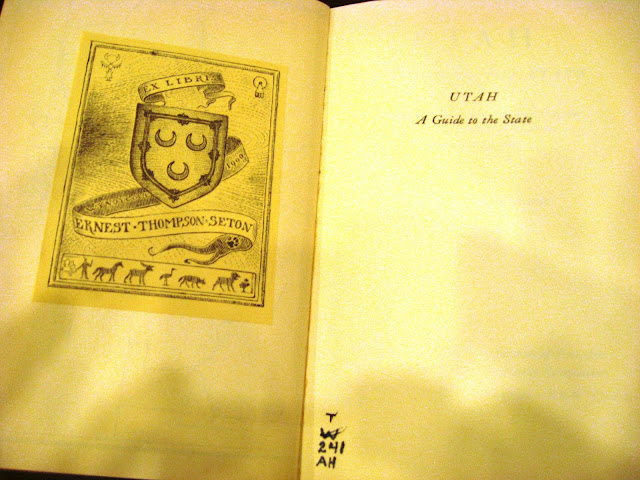 Which brings me to, Family History! Or at least contextual background.

The first excerpt is about the Hobo Camp outside of Ogden. We've heard family stories about this and my Grandpa used to sing, "Mulligan Stew" "Ho! for the slum, boys/Mulligan tra-la-la!/It sticks to your gums, boys!/Tra-la-la-la-la!" I wonder now exactly how it was that he learned that song . . .

[Describing US 91 Ogden to Salt Lake City] “At 3.1 m. [south], the road crosses a curving viaduct over mainline railroad tracks that parallel the broad, shallow Weber River. Left of the viaduct, out of sight behind cottonwood trees on a bend of the river, is Utah’s largest hobo jungle. 'Bo’s' gather here in spring and fall, and between trains 'work' the neighborhood for the 'makin’s' of their 'mulligan' stew. The population of the tin-shacked jungle mounts at times to nearly 200.” Utah: A Guide to the State, Compiled by Workers of the Writer’s Program of the Work Projects Administration for the State of Utah (Hastings House, New York, 1941) 279-80.

And then this gem explaining how Utah was developed without any federal government assistance (irony intended):

“Between Farmington and Centerville . . . , huge boulders by the roadside and a half-buried house are reminders of disastrous floods that raced down five canyons in the area in 1923, taking seven lives, and again in 1930, causing damage in excess of a million dollars. Spewing mud, debris and rocks weighing up to 300 tons each, the outpour blocked the highways and a railroad, smashed homes, wreaked havoc on farmlands, and destroyed irrigation sources. Overgrazing, trampling of the soil by livestock, and fires at the canyon heads were found, in an analysis published in 1934 by the U.S. Department of Agriculture, to be the principal causes of the flood menace. Following the study, livestock was excluded from the region, a 600-mile system of terraces was constructed on denuded areas by CCC workers, and oblique rock diversion walls were built along the highway to keep flood waters from farm houses. The terraces, planted with Douglas fir, have thus far controlled the run-off, and elimination of grazing had permitted revegetation of the slopes.”  Id. at 282.

I'd also heard stories about those horrific floods to the point of deadly terror as a young boy riding past those steep hills and canyons close to the Lake. There was one that my dad told, hopefully apocryphal, about a woman trapped in her house with a bull as the house tumbled down the hill in a flood.

Then there was this description of Centerville where we now live in a suburban paradise where the orchards once were:


“CENTERVILLE, 7.5 m. (4,246 alt., 670 pop.), hardly recognizable as a town, had business houses widely separated by farmlands. Orchards, interspersed with cottages and vegetable patches, cling to the foothills of the Wasatch. Bordering the highway are grain fields, truck gardens and retail fruit stands. Cherry season, in June, is hitch-hiking season on the highway between Centerville and Salt Lake City. The roadside is lined by youthful fruit-pickers eight to fourteen years old, who sit hopefully for hours, jerking vigorous thumbs at every passing car. Pickers’ wages fluctuate from 25¢ to $2 (for an expert) per day, according to crops, prices, and the amount picked—or eaten. Stomachache generally depletes the ranks of local pickers, and farmers supplement their crew with migratory workers.” Id. at 282-83.

“Present-day travelers find this area easier to traverse than William Chandless, who complained, in A Visit to Salt Lake (1857), that 'though the Mormons are certainly a hospitable people, they have a prodigious number of savage inhospitable dogs about their houses, and worse still, almost impassable ditches, so that the benighted traveler has pretty well as much work to find his way into a house to inquire, as to find the one he is inquiring for without information; even when ditch and dog are safely passed, you may find the householder a Dutchman or a Dane, which is perplexing to a bad linguist like myself, or possibly your Saxon ears are refreshed with ‘Dim Sassenach’ from a saint of a Welshman.'”  Id. at 283.

I don't know if Seton actually ever opened that book once he put his sticker in it. But I'm sure glad he had it in his library.
at 4:46 PM