Well, he didn't really see me that way. And we didn't follow any traditional practices. In fact, it was more of a developing friendship - just the way it should be.


It came about in an interesting way through his son, Senator Tom Udall. Back then he was just Attorney General of New Mexico. I was Bishop of the Santa Fe Ward and was trying to reach out to our members who were not attending. I called up Tom and he returned the call. I told him who I was and my desire to meet with him. He directly explained that he hadn't been involved with the church since his youth but he had great respect for it and loved to meet with his bishop every few years to keep in touch. Well, we had lunch together one day and it was a lot of fun.

We had shared interests in that he was Attorney General and I was a federal attorney for the U.S. Department of the Interior. In fact, I thanked him because his office had issued a wonderful opinion we used to help us in our legal battles with certain New Mexico counties that claimed their authority was supreme over officials of the United States. The previous AG had opined, accurately IMHO, that counties were only creations and subordinate institutions of the state. And it was the state that exercised the sovereignty of the people of the state, limited by federal sovereignty of the U.S. Constitution. I could live with that.

We also talked about religious and political matters. Tom was already indicating his interest in seeking higher public office. He took generally progressive, democratic positions, but he always had respect for the religious side acknowledging his Mormon Pioneer heritage and by framing women's right to make their own choices about reproductive health by recognizing the importance of their consultations with their own religious leaders without government interference.

He also suggested that I go and meet his dad. That was one of my interests as well. Tom was very encouraging saying that his dad loved to visit and would connect well with me. He told me where his dad's downtown Santa Fe office was where he worked on his writing. "Just go in and up the stairs because he doesn't have a receptionist." So I went.

I found the address, opened the door and went up some stairs at the top of which was a moderately tidy office with Stewart Udall sitting right there at an old typewriter working away. I introduced myself as his bishop. He stated right out that he had no interest in activity in the church but he was glad to visit and as we talked he offered to speak at a fireside or some other event when he got his current book done because it was in part about Mormon Pioneers. Somehow that didn't work out but that was more the fault of my leaving Santa Fe without the ability to follow through.

We had fairly regular visits over a few years. We talked about his and my work at the Department of the Interior. We talked a little about Western History. He was proudly the descendant of both John D. Lee and Jacob Hamblin. He had his opinions on Mountain Meadows in which he placed no direct blame on Brigham Young for conspiracy or even knowledge, but he did blame Brother Brigham for helping to stir up the climate of anger and fear that led to the horrific tragedy.

He shared some of his books with me. He even shared a copy of his manuscript that became The Forgotten Founders: Rethinking the History of the Old West. He asked me to offer any edits or suggestions and I was so intimidated by that I didn't know what to do. I read through it and didn't see anything obvious. I did go back to talk with him and, big picture guy that I am, the only thing I could say was that his emphasis on Mountain Meadows seemed to be the exception that swallowed the rule of his theme that the West was established by the peaceful and common men and women, not the violent gunslingers of Western legend. Hmm.

Anyway, it was a good friendship. One of the books he gave me was The Myths of August: A Personal Exploration of Our Tragic Cold War Affair with the Atom. This was interesting because Stewart had worked with his friend, Senator Orrin Hatch, across the political divide to get legislation to compensate Utah Downwinder victims of Nevada nuclear tests. His friendship with Hatch spurred me to the challenge to get him back to church. I said we had plenty of conservatives; we needed more liberals at church. I got a serious eye-brow raise out of that one. I hope he's remembering that now on the other side.

The most powerful incident of our friendship was when I was excited to apply for a promotion in our Albuquerque office. He told me that he had written a letter to the presidential-appointee head of my office in Washington to recommend me for the job. I was stunned. I said, "But you don't really know anything about my work!" He responded, "But I know you."

Best compliment of my life. 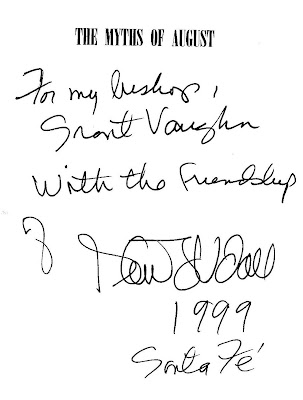