I had good parents. Yet, as a child of the 60s I watched a lot of TV. It helped shape my personality.  Some, like my wife, might even say it warped my personality. But that's from somebody who sees this picture: 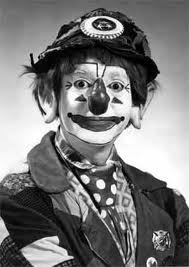 . . . and thinks "clown." Any true child of Seattle will not see a "clown," rather a real person who had more influence, certainly more time with us, than any grade school teacher and maybe almost as much as our own parents. He was on for an hour in the morning and an hour after school. And then there was another hour on Saturday mornings. That's eleven hours a week. Certainly more time than I spent in Sunday School and Primary.
That's our beloved J.P. His full name was Julius Pierpont Patches, or J.P. Patches. He was mayor of the City Dump and we were all Patch's Pals. His cohort and eternally, unrequited love (he would never allow himself to set the wedding date) was Gertrude. I hesitate to post a picture here as once again my wife will miss the point and say, "That's a guy in a dress." And I would have to say, "No, that's Gertrude." The video will demonstrate and you can draw your own conclusions:

You can follow YouTube to see more J.P. and Gertrude. I suppose it is an acquired taste easily obtained in youth now much too late to relinquish. And he wasn't the only one! My pre-school days were enriched years before Sesame Street began with Wunda Wunda:

Kindergarten was fortunately in the morning session. I would get off the bus, come in the house and sit down to my lunch of soft-boiled egg and toast (that was a little weird) and watch. Ruth Prins did another show on Saturday mornings early before the network cartoons came on. It was called "Televenture Tales" on KING TV in which she would talk about books. I once won a copy of Freddy Goes to Florida, by Walter R. Brooks, because I wrote in the winning answer to a question.
Second to J.P. in popularity and absolutely full of talent was Stan Boreson. His theme song was another test of Seattle childhood legitimacy:
And next was Brakeman Bill from far down the dial on Channel 11. That was almost UHF all the way from Tacoma. We saw Brakeman Bill once in person at Finn Hill Jr. High. We also conducted a successful backyard carnival for Muscular Dystrophy partially sponsored by Brakeman Bill and I still have the Certificate of Thanks from Jerry Lewis to prove it. Here's Brakeman Bill:
And last, but far from least, was the much more adventurous Captain Puget. There is a brief clip in here with another iconic Seattle personality, Ivar Haglund of Ivar's "Acres of Clams" fame:
Ah, Seattle Kids' TV! My dad always waxed nostalgic about how great old-time radio shows were. He said it was all about how you had to use your imagination. I think the beauty of Seattle Kids' TV is that you had to use your personality - or at least develop one.