Really Bad Art - In More Ways Than One 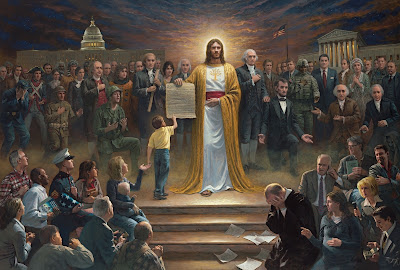 Well, I really lost my moderation on this one. The passion just overcame me this time. I got caught up in some ongoing Bloggernacle postings on the latest controversy at the BYU.  The Bookstore recently removed this print of a painting by  Utahn Jon McNaughton from display and sales. The artist was offended and removed all his works with some scathing criticisms of the "liberals" taking over at the Y (of all places!) with their evil political correctness. For a taste of that, you really should read McNaughton's protest and especially the comments. This controversy was also reported in the local press, the Salt Lake Tribune and the Deseret News.

The blogs I got involved with were Times & Seasons and By Common Consent. And then even a slight parody piece on Faith Promoting Rumor connecting it to the Birther Movement. Well, the By Common Consent piece is also parody, and really the best posting, because it is mostly a light-hearted collection of hundreds of Haikus having some fun with the whole thing. I can't even remember if that's all of blogs I commented on. Some of my remarks were inappropriately intemperate and partisan, even the Haikus, risking my reputation as a moderate. And I regret that. I'm still trying to figure out how to express myself, even in debate, and not become contentious or rude. That is the biggest challenge for a moderate. It is so hard to fight fire with plastic squirt guns. The opponents eventually melt you down and burn you up.

Bottom line for me: the BYU Bookstore can sell whatever it wants or not as it sees fit. The Bookstore is the public, commercial image of the flagship University sponsored by the Church of Jesus Christ of Latter-Day Saints and that does reflect to some degree on what is or should be sold there. And there is a difference between a wide variety of books for selection and prominently displayed "art," the display of which, when the image is a blatant political or religious theme, conveys all the message the artist was attempting to convey unlike having to open the cover of a book and reading the entire contents at a glance. And if what is visually displayed is blatantly political propaganda, there can't help but be some link between the propaganda and the institution putting it on display for purchase.

If there is a balance of artwork for sale and free opportunity to select one's preference, that gives the message that the institution selling the work or sponsoring the sale is open to consider all forms of art and expression. Does the Bookstore sell posters from MoveOn.org? The BYU Bookstore is certainly careful and cautious on the line of art or free expression vs. explicit sexuality or pornography, and on some controversial cultural, religious, or political issues. And that is just fine for a church school. But when it does display such things, it then gives some sanction that it is authorized at least to be considered under those exacting standards. A piece of propaganda that while perhaps acceptable even to a majority of the public or those involved in the institution (and I'm not sure this is), need not be displayed and thus promoted when it so clearly offends a significant portion of the customers or participants in the sponsoring institution. And it does clearly violate the sponsoring institution's official position of political neutrality.

Besides, this is really bad art.

Addendum:
I found the other posting on T&S. I thought there was something else.

Addendum #2:
And I found yet another from Nine Moons. I think this is the first one I saw because I made the Gondor joke before I realized it had been done already in the Haikus on BCC.

And, Pat Bagley comes through with a great and fairly decent (although sure to offend some) parody. You have to go to the site because it's interactive just like the original.

Addendum #3:
And here's a very interesting blog from a conservative attempting to be fair-minded. I commented on this one. But look at the comment by Chris just above below mine. That is a wonderfully reasoned and presented position. I wish I could write like that guy.

Addendum #4
March 16, 2012
There is a new satirical critique of McNaughton by Matt at BCC based on some of the alleged artist's recent work which is only getting worse. Thanks Heavens for satire!

Addendum #5
July 22, 2012
Best review yet of McNaughton's work can by found here from Stephen Colbert. He has the Founding Fathers commenting on President Obama - "Who gave that slave a suit?"
at 9:43 AM