Non-Essential Shutdown of the People's Government

Obviously it's personal. But I'll try to pass by most of that.

I had predicted that the shutdown really wouldn't happen and it hasn't yet, but it's not looking good. I thought our pragmatic process president would figure out somehow a way to compromise out of this. What he has done, though, is pretty good in a political sense (well, except for all the Obama-haters out there for whom he can do nothing right.) But it's now set up so that he appears to most to be the reasonable adult in the room. And he doesn't even have to blame it on Speaker Boehner like Clinton successfully blamed the last one on the newt's petulance. The President has a new foil.

Yes, the tea party can get all the deserved blame. The President can even express sympathy for Boehner's difficult position to play off the tea party's unreasonableness. And what will Boehner say? That it's not the tea party's fault but the whole Republican Party? Actually, he will attempt to blame Obama and that will fly with some. And sure, the budget has to be addressed, but not in the dogmatic and revolting way in which the tea partyists are going to the barricades. The Dems and the Prez have their counter proposals which are much more people friendly and revenue enhancing than making the poor and middle class pay for the benefits to the rich. It is simply inherently inconsistent and doomed to failure to promote a political movement supposedly "of the people" that is actually a small minority of a declining demographic demanding policies that will principally benefit the most prosperous.

Boehner knows that refusing to compromise just doesn't work under our Constitutional system (see, Civil War). What I would like to note here is that the tea party is a passing phenomenon and it will be passing soon. (Anybody remember Ross Perot's "United We Stand" Party?) The tea party's high-water mark was the election last November. And that high water mark was admittedly, more powerful and successful than Picket's Charge at Gettysburg, even if not quite as dramatically romantic.

I predicted (actually announced) the death of the tea party in my Facebook note just after the last tax-day protest, nearly a year ago. I could admit I was premature as the high point came last November, but I recently saw this very interesting graphic at Nate Silver's 538: 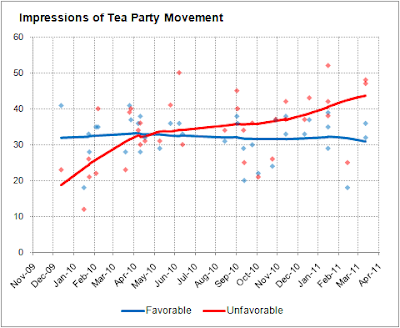 The interesting thing to note that shores up my prognosticating abilities, is that the point where the tea party's unfavorables passed its favorables is just after the middle of April, 2010, exactly when I announced its demise. There is no way the tea party can become a dominant force in American politics. All it can do is disrupt the Republican Party.

The cracks in the Republican party are gaping wider. A house divided cannot stand half sane and half tea. The new tea party darling, Michelle Bachman, is serious about being a candidate for president even if she doesn't understand she is not really a serious candidate. The good part of that (besides the great entertainment value) is that she is apparently co-opting Palin's base in Iowa and elsewhere.

The Republican base is not enough - except maybe in Utah where they can control the caucus system so easily just like the Iowa presidential caucuses. What I think is most interesting is that with the demise of the tea party, who is going to be the constituency of those who were elected in 2010? Especially in the Senate - six years is a very long time. Lets hope and pray that if there is a government crash, it is the extremists who will tumble and not the moderate middle of the people of, by and for whom the government was intended.
at 7:44 PM