Well, you have to give me some credit for getting quoted. And Andrew's style is to quote his readers' e-mails anonymously, which is just fine. And I will reveal here that the second block quote in this recent piece of his is none other than little old Passionate Moderate Mormon - me. But I think Andrew still doesn't get it.

This last summer, my wife, various relatives and friends, and I (six of us total), had a wonderful trip to Britain. One of the many highlights was an afternoon in the British Museum. (By the way, I recommend a full day or two if you can manage the time - we were a little hurried to see all we could before we got out to the ancestral lands in Wales for the family history purpose of the trip). Just after the Egyptian exhibit with an actual mummy with very interesting markings on its knees, navel, and breasts (but I'll leave the rest of that to Nibley's intellectual heirs), I came across a surprising display of "golden plates." It was shocking to the max! 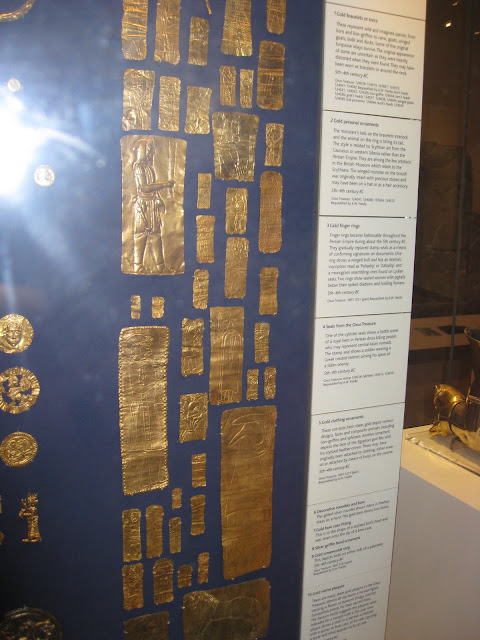 This is part of the Oxus Treasure from ancient Persia. It dates from the Fifth Century B.C. which would be a few years after Lehi left Jerusalem and then the city was conquered by the Babylonians, right next to Persia and Persia took it all over a little later. In fact this treasure connects up to none other than Cyrus the Great, the one who in the Bible allowed the Jews to return to Jerusalem! The interesting thing is down at the bottom of the museum's explanation it described "votive plaques" which is the same thing as saying "religious plates." They mostly have figures, but also symbols and what looked like some writing to me.

Now, I never meant this blog to be an apologists' blog because picking up little pieces of fact here and there in an attempt to prove a point is the same as anti-Mormon or tea-partier proof-texting which I abhor. But Andrew says "The story of the golden plates is so obviously a fraud it beggars belief." So, I don't get it. Here we have in the Oxus treasure nothing other than religious, gold plates from a time and place not far from where Lehi departed on his journey. So religious gold plates are "obviously a fraud?"

Maybe it's the Angel Andrew is talking about. Granted, we're right back to matters of belief, not proof of similar angels in the British Museum. But how can the Angel be so "obviously a fraud" when Andrew, a believing Catholic, comes from a rich tradition of angels over the past two thousand years? (Well, just since Christ. I guess Catholicism includes angels from the Old Testament days as well.) Maybe Andrew doesn't believe in Catholic Angels (I don't have much reason to doubt them myself). If so, I guess that's fine. But that's his choice.

Maybe it's the whole Book of Mormon history on the plates? While I can't yet prove it through scientific methods, I am not aware of anything to scientifically or rationally establish the definitive proof that the history is a fraud. I've been to the Yucatan. There were various peoples in the Ancient Americas. They had ancient civilizations. Why couldn't there be a divine history of at least a part of them? In fact, if the plates were real and if the Angel were real and Joseph was a prophet of God, how could the history be a fraud? The Angel lied? Well, I guess that's the fundamentalist Christian explanation based again on belief, not exactly rationalism. Even the Izapa Stela No. 5, of which I bought a cheap plaster reproduction at an ancient Mayan ruin, may convey some Meso-American mythological figures and not the literal story of Lehi and Nephi. But nobody can tell me that is not a universally recognized "world tree" or "tree of life" as the central theme of that picture. So, I can't prove or disprove that either. Book of Mormon history may be improbable but that's not the same thing as rationally impossible.

Bottom line, Andrew has done nothing rationally or spiritually to disabuse me of my Faith. And I've had the strongest spiritual witnesses of its truth that Andrew is free to seek, or not, as he chooses.

I'll leave Kolob for another day.