Baptism for the Dead: Getting to Know You

Volume 7 of Documents in the Joseph Smith Papers is out. (I seem to have skipped a few so my collection is not yet complete.) My purpose is acquiring this volume was to learn as much as I could about Joseph Smith's first teachings on Baptism for the Dead. (See Doctrine and Covenants, Section 128 for a fuller, scriptural background.)

Joseph first mentioned baptism for the dead at a funeral for Seymour Brunson on August 15, 1840, but there is not much recorded from that discourse. He then addressed it at the General Church Conference in Nauvoo in early October 1840 when hearers were so motivated they immediately left for the Mississippi to perform baptisms for their dearly departed. And, once again, some of his teachings were not fully recorded. Still, there are footnotes to contemporaneous reports such as a letter from Vilate Kimball to Heber C. who was on a mission in England. This would be how the British Saints and missionaries such as Richard Steele would have heard about the new doctrine so early.

And there is a very important aspect of what Vilate tells Heber. Here is the section of her October 11, 1840 letter from online, digital sources at the LDS Church History Library: 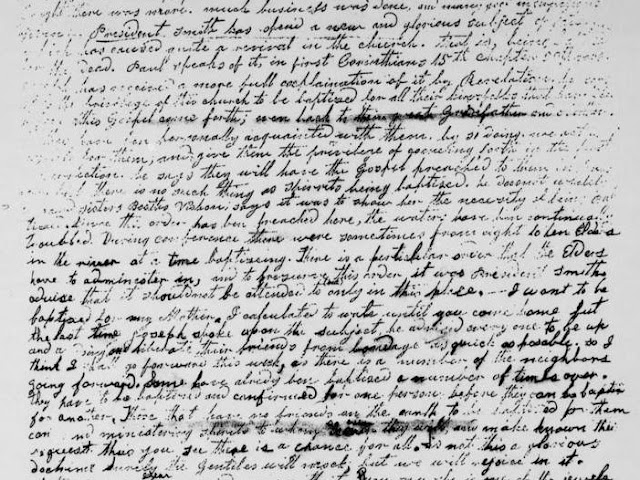 Of interest is the initial idea that it is:


"the privilege of this church to be baptized for all their kin-folk that have died before this Gospel came forth; even back to their great Grandfathers and Mothers [ ] they have been personally acquainted with them"

This may simply be a practical consideration to be baptized for those whom the Saints knew personally for some kind of record of memory to be documented. The concept of genealogical research was not readily available to common people outside of a gentrified or royal class system which wasn't at all common in the American democratic republic. Serious genealogical research in the LDS Church did not begin until after Utah Temples were in operation.

But it sparks the idea that we should know those for whom we are baptized by proxy. In the present day with the vast amount of information available through genealogical resources, it is much easier to know our ancestors. And the facility of modern travel makes it much easier to visit the locations of their mortal lives and even the respectful resting places of their remains. In some cases, we visit the less respectful places of the tragic and sometimes horrific end of the physical body of those we remember through respect.

Now, we perform the proxy baptisms in beautiful Temples rather than the Mississippi River. Joseph Smith eventually directed the Saints to wait for a temple to avoid the free-wheeling baptisms in the river without adequate record-keeping.

Somewhat like Mississippi River baptisms for the dead, FamilySearch.org, the free-wheeling, open, crowd-sourcing of our eternal family tree requires constant vigilance to monitor the documentation of our kin-folk to whom we are sealed through the ordinances of the restored gospel. We have to know something about them to protect their informational sources.

The main point remains that through these ordinances and documentation of research we are able to know and link ourselves to our families across time and space, both geographic and cosmological.

And that I why I keep going to Wales.