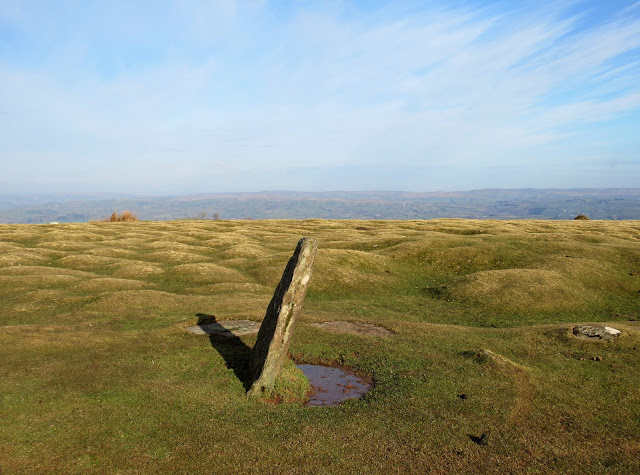 We're skipping a bit and I'll catch up. It's just that Easter is worth something on its own and out of sequence.

The sky was blue and bright this morning. Then the sun came over the Black Mountains (Y Mynyddeodd Duon). It was time to get up there. Originally, I had planned to go up on the Equinox and mark the shadow of our little standing stone. I was wise about the weather that day and stayed on lower ground. This bright morning, the shadow is still pretty close to due West, but then every shadow is, of course, with the sunrise. The question is, did our Neolithic ancestors know and mark that? You will see there is a rock on which the shadow falls. It is likely the standing stone was set straighter a few thousand years ago and most of the stones of the circle are missing, so who knows?

Still, the mountains were glorious!

I went on up to Gospel Pass before I turned around. The road was just a bit icy.

Knowing my Geography better down below, I could pick out more landmarks. With some significant zoom, I could identify Maesllwch, the estate above Glasbury on the west side. The knoll is hiding the rest of Glasbury.

Then I coasted down into Hay stopping at the Kilvert, one of my homes away from home, for the loo. I put on my tie and combed my hair. I parked at the bottom of Cusop Dingle which some use as Hay-on-Wye "cheap" parking and walked up to St. Mary's in Cusop.

I had planned on going to St. Peter's in Glasbury where we found the graves of my 6th-Great Grandparents Vaughan. But with recent discoveries in Hereford Archives, we now know that their daughter, 5th-Great Grandma, Hannah Vaughan, lived for some time in Cusop right over the border in Herefordshire, England. She had an infant son buried there and she may be as well, both in unmarked graves. It was the right place to be for Easter.

There was enough time for me to wander about and I followed the public footpath out onto the field to get some unique vistas of Cusop and Hay-on-Wye right behind it. (The US could use some public rights of way, but not enough of our farmers have read Tolkien, Austen, or James Herriot and you would be shot.) There was a woman bustling about outside the church who invited me to services and I told her I was planning on it. I sat for some contemplation on a bench in the churchyard and she came back to me saying, "Are you the chap from Utah?" Well, what could I say? We talked about the presentation I had given which she had missed because of previous engagement and it was all good.

The service was Anglican, we were on the English side of the Dulas Brook so it was not Church in Wales. We'll visit St. Peter's someday. We've been to a few Anglican services and it's easy to follow along on the printed service. There were only about ten words in the creed or other readings that I could not ascribe to so I just didn't say them. I sang the hymns which I mostly recognized, and it was a beautiful Easter message.

It was a bit less formal as it was a "Family Eucharist" service. There were only two little girls there out of a crowd of a couple of dozen which is near capacity in a tiny, medieval church. In the middle of the service, the Vicar, Michael, stopped and said, "I believe there is some chocolate around the church." The Church Warden then helped the two little girls find all the little chocolate eggs around the baptistry, the pulpit, etc. The older of the two girls handed one out to each person after the service.

Anglican Communion, like the Catholics', is simple to decline as the congregants go up as they please, row by row, to take the wafer and wine at the rail before the altar. The Vicar and Curate took the wafer and wine chalice out to an older woman who was not very mobile. I thought she had drained the cup. Maybe she did, but the Vicar still brushed the crumbs into the chalice and drank the dregs behind the altar.

There were a few there who were part of the Cusop History Group and wanted to talk to me about my presentation and their continued work. They have some tasks for me to help with. This will soon be my life (not becoming Anglican, but helping with family history).

Walking back down the dingle, I noted the "Thirty Acres" which was the best guess among those present at my talk for what would have been called "Cusop Green" back in the 1820s. I saw another reference to it at Hereford Archives and sent that along by email to the group. Along this somewhere is where my 4th-Great Grandparents Vaughan lived while in Cusop.


I will return. I have been called.